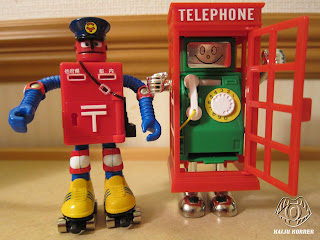 So far I haven't had many chances to talk about vintage toys, mostly because I've had my hands full covering indie sofubi. But the toys of yesteryear are amazing in so many ways. So are the nearly daily sights and sounds of Japan that make you say, "Huh wha??"

And so the confluence of these strands brings us inevitably to Robo Hacchan (aka 8-chan). I had seen some of these toys (made by Popy in the early 80s) tons of times at shops. I'd see the postman or telephone booth figure and do a "Huh wah - cool!" But I never pulled the trigger...until yesterday. 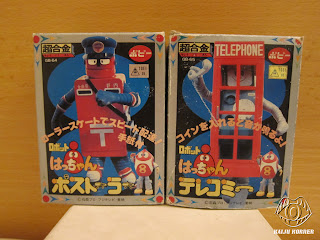 I saw the pair in Nagoya, and not only were they nicely priced, but they were both deadstock. So I picked them up and started this new journey.

The figures are characters from a tokusatsu (特撮 - live action) TV show called ロボット８ちゃん, which is sometimes translated as Robo Hacchan, or 8-chan (the name of the main character).

More after the jump:
The show, produced by Toei as part of its Fushigi Comedy Series, ran from 1981-1982. It's often compared to Robocon, a somewhat earlier live action show that remains popular and much better known than Robo Hacchan. But does it have a robot postman on roller skates? Eh? Eh? Thought not.

Let's check out these 8-chan figures, starting with the telephone booth. (For our younger readers, a telephone booth is a small rectangular chamber that transports riders through both space and time....Newer models may accept stored value cards.) 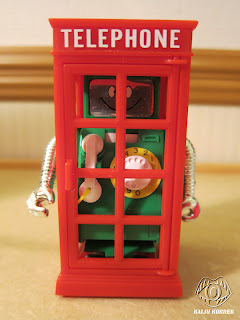 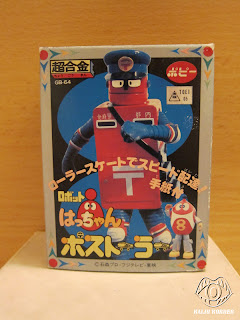 I own the police robot dude from this show, it's a great little toy. The two you have reviewed here look great, I may have to hunt them down whilst on my next Tokyo vacation.

That Robo Hacchan show looks outrageous! I wish I'd seen it when I was a child.
Great blog! Thank you for being so dedicated.