In the late 1960s-early 1970s, records for children's movies, TV shows, and anime started to become popular in Japan. The good thing about vinyl records (like the one in my first Vintage Discoveries article) was they were well made. The bad news is they were expensive.

Enter flexi discs, the thin, clear plastic records that might be green, blue, or red. These were so cheap that you could pair them with a mini book and still sell them for less than the cost of a vinyl EP. In the late 60s, flexi discs were really thin and floppy, and they were easily damaged. These were known as "sonosheets." Asahi was one of the main companies in the field, and their Asahi Sonorama (朝日 ソノラマ) series included book + sonosheet sets for titles like Ultraman, Mighty Atom (Astro Boy), etc.

Advances in music printing technology came quickly, and in the 1970s, a new series of Asahi book + recording sets was launched: the Sonorama Ace series. The full title is Sonorama Ace Puppy Series (ソノラマエースパピイシリーズ). Note the puppy in the top right corner of the very top pic.

In this series, the paper was thicker for the mini books, though the internal binding wasn't the best, leading to pages easily becoming separated.
The new flexi discs in the Sonorama Ace series were thicker and sturdier than the discs from the 60s. Called "punch sheets," they were made from a clear red material.
It's worth noting that few people will know what a "punch sheet" is, so in Japan the general term used is "sonosheet" for all types of flexis. 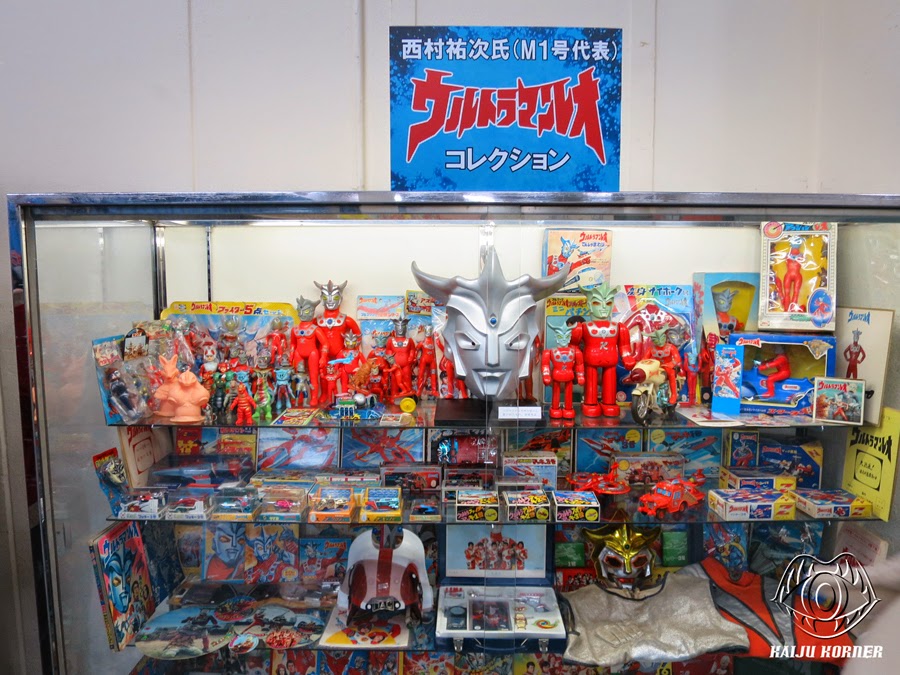 One of the highlights of Super Festival 67 was an exhibition of Ultraman Leo goods. A single cabinet contained a beautifully curated collection of toys, books, models, scripts, and other items related to the show. Here's a detailed look at the cabinet. 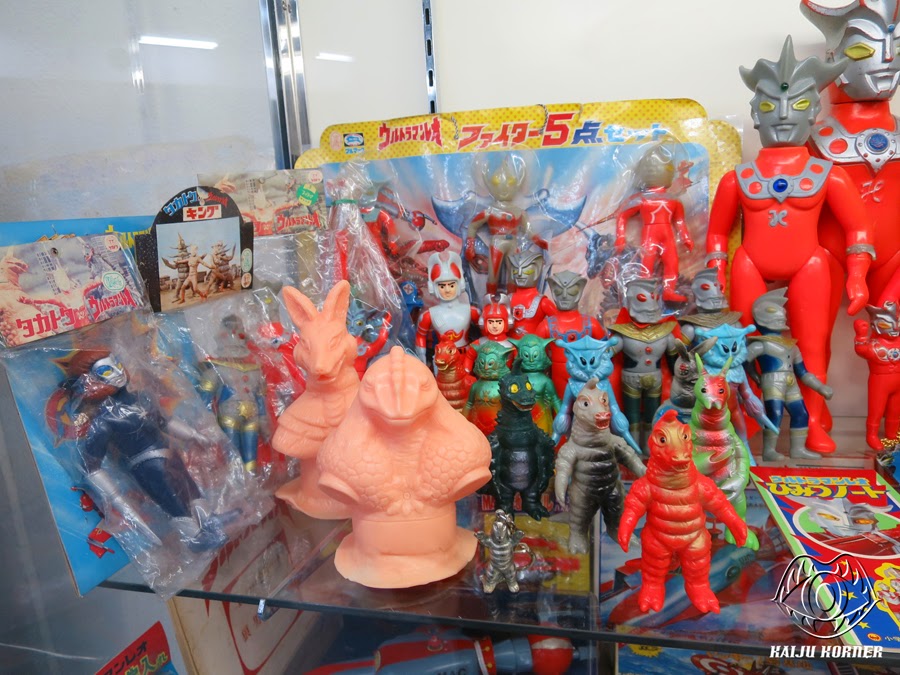 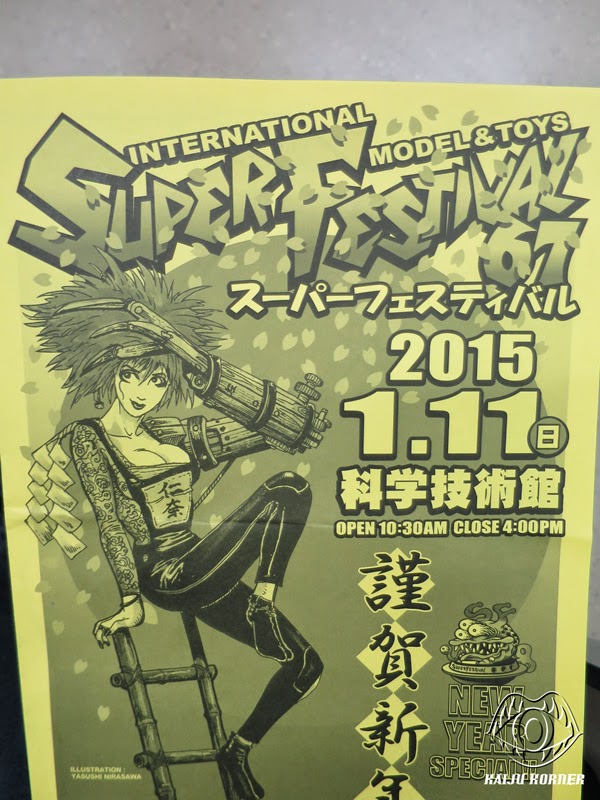 So here's our coverage, with pictures and notes. The makers are alphabetized. 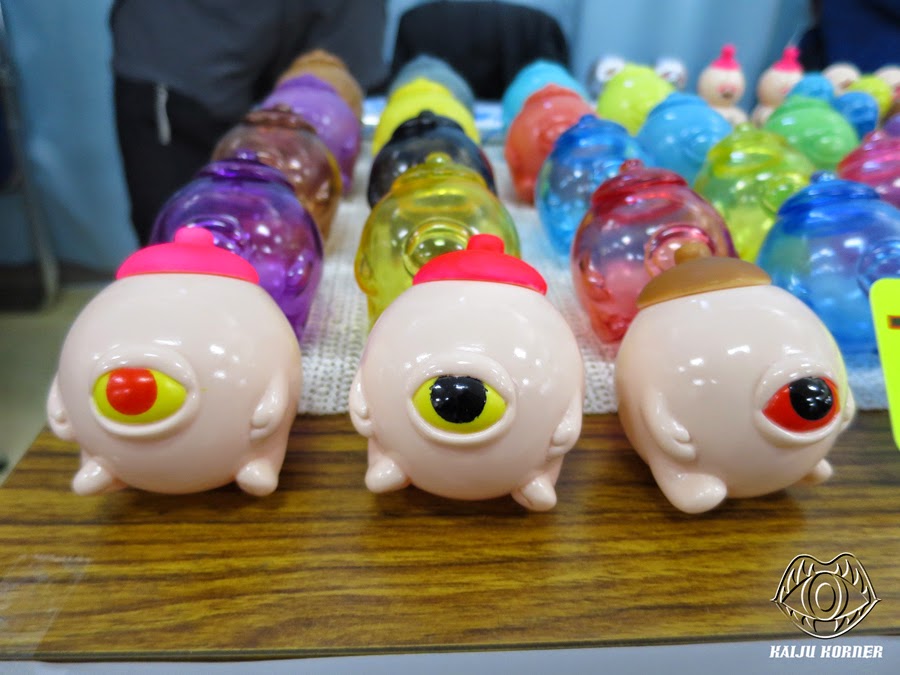 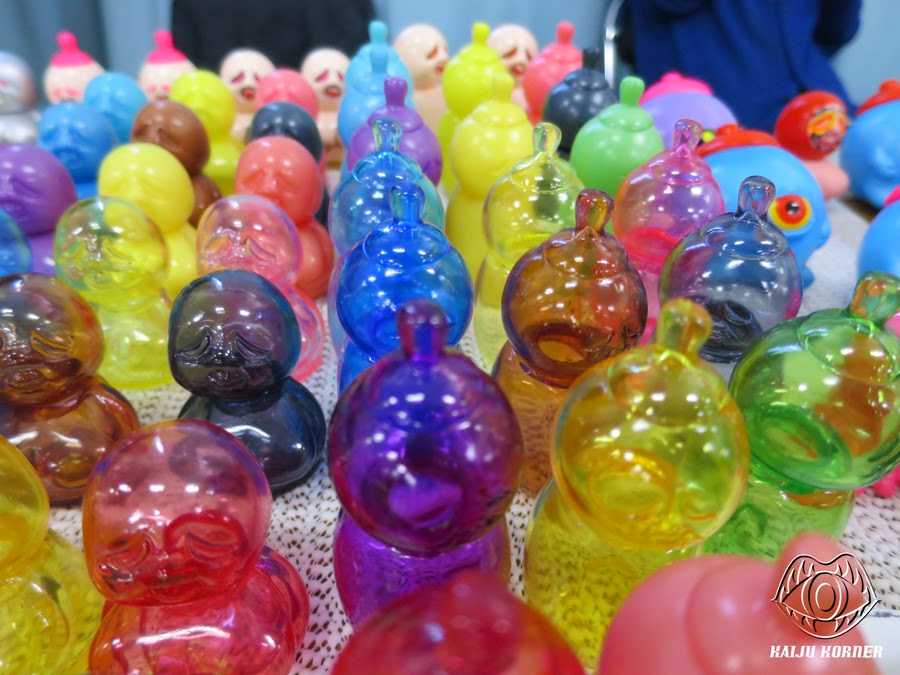 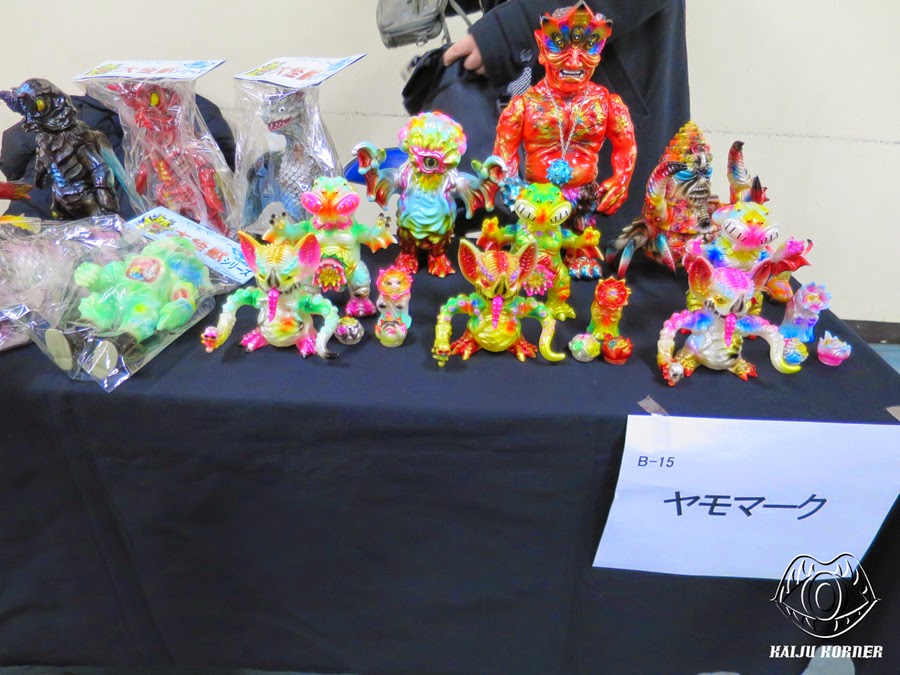 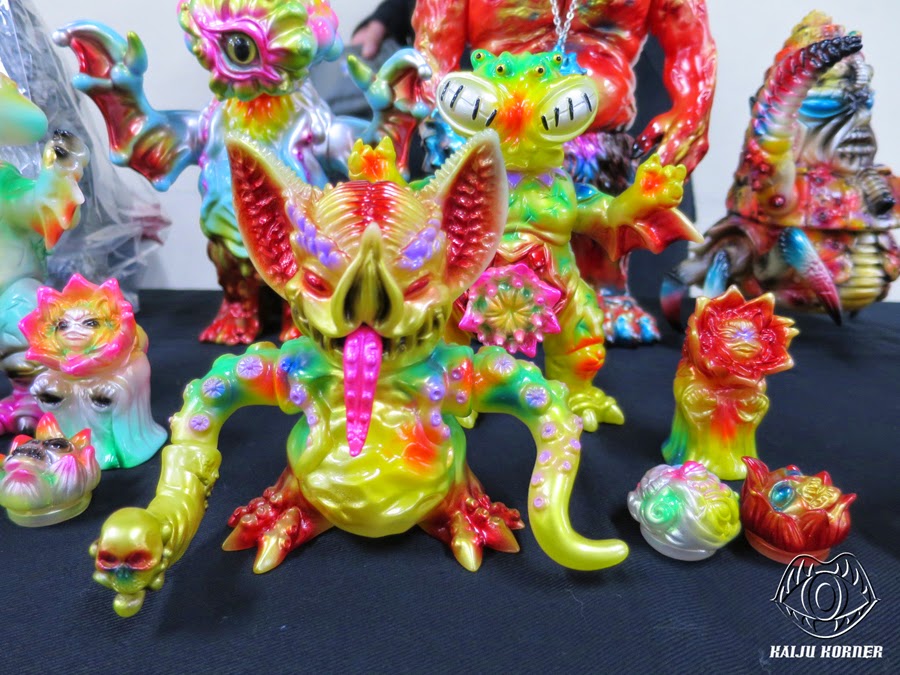 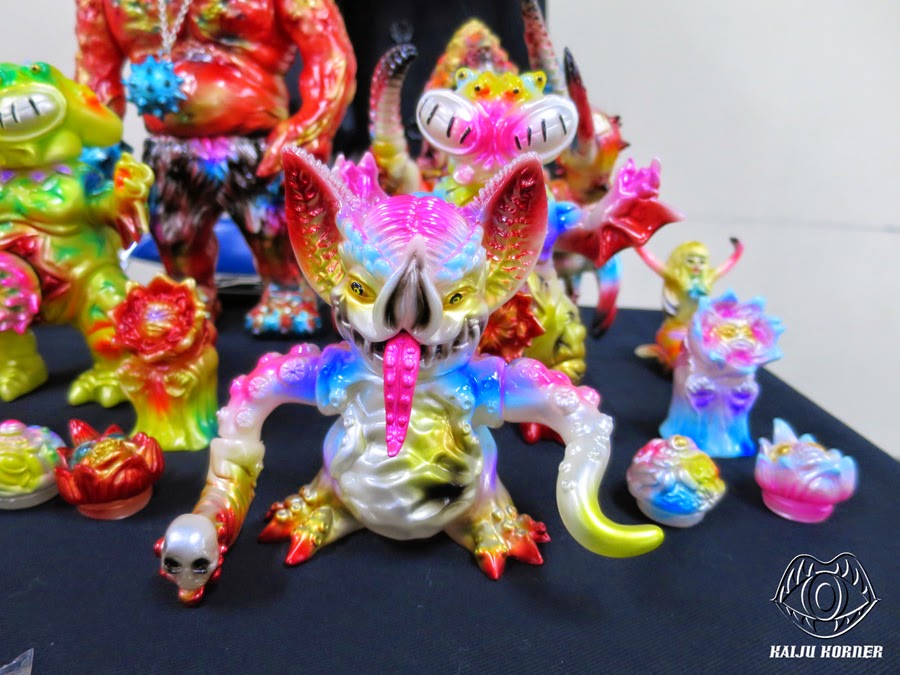 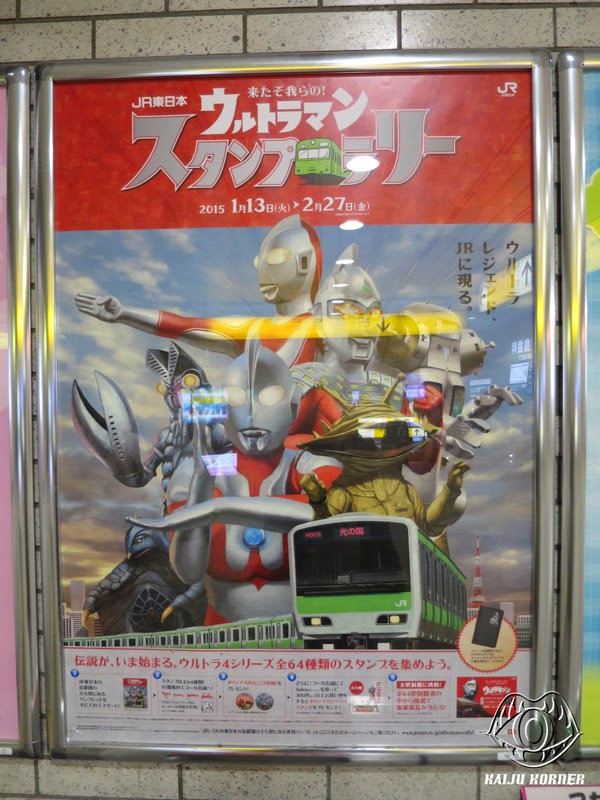 I spotted this poster at a JR station advertising an upcoming JR x Ultraman promotion. It's marked JR East, which is primarily the area around Tokyo and heading north towards the edge of Hokkaido.

The Tokyo-centered promotion will run from January 13 - February 27. The little sequential numbers on the bottom of the poster run through the details. From what I can make out (please take this as a rough outline, as I can't claim to be able to translate the guidelines perfectly), it starts with (1) buying a pamphlet, after which (2) you can go around to JR stations and collect 64 different stamps representing heroes and kaiju from four Ultraman series. Here's the full treasure map. For example, here is the kaiju associated with Nakano station: 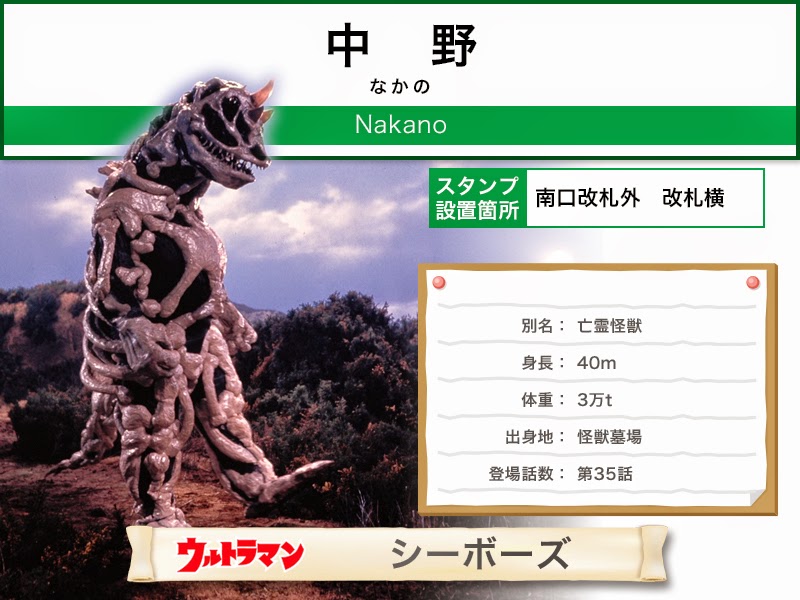 Then (3) a total of 12 original menkos are available as giveaways. The promotion website says you get 2 menkos by collecting 10 stamps. So I'd guess you can get all 12 menkos by filling up most of the stamp book. Here are a number of them:

*Geeky side note – these are called “maru menkos,” meaning “round menkos.” Paper menkos like this have been around a long time – more than 100 years. During the Meiji and Taisho eras, they often portrayed generals, samurai, etc. During the Showa era, and especially from the 1950s on, menkos featured a much broader range of subjects, including movie stars, cartoon characters, and other pop culture icons. (The other popular menko shape, which seemed to reach a height of popularity in the 1960s, are rectangular.)*

OK, back to Ultraman. Next up (4) there are 10 different Ultraman acrylic stands available. You get one for free after spending 300 yen at one of 10 "goal stores" with a Suica card. There are 1,000 of each type. Here's one of them:

Also, if you  collect all 64 stamps, there's yet another prize available. Now getting that would be a lot of leg work!

Finally (5) there are 78 bonus prizes that are chosen by lottery. Wow, if I've got it right, the top prize is a visit by Ultra Seven to your house! That's pretty wild.

This rabbit hole turned out to be a lot deeper than I expected. What started with a simple photograph of a poster turned into a Dantean labyrinth that overmatched the single can of Kirin I had tonight. So, well done.

Once again we learn several key lessons: (1) Ultraman is still insanely popular in Japan. (2) Major public institutions are perfectly comfortable with promotional tie-ins involving nearly 50-year-old tokusatsu heroes. (3) If you're going to do something, make it complicated enough that only the truly devoted will pour the time and effort needed to figure it out and maximize the prize winnings.

I have to say, those menkos and acrylic stands look pretty cool! But what would I serve Ultraman Seven? I wonder if he likes Kirin... 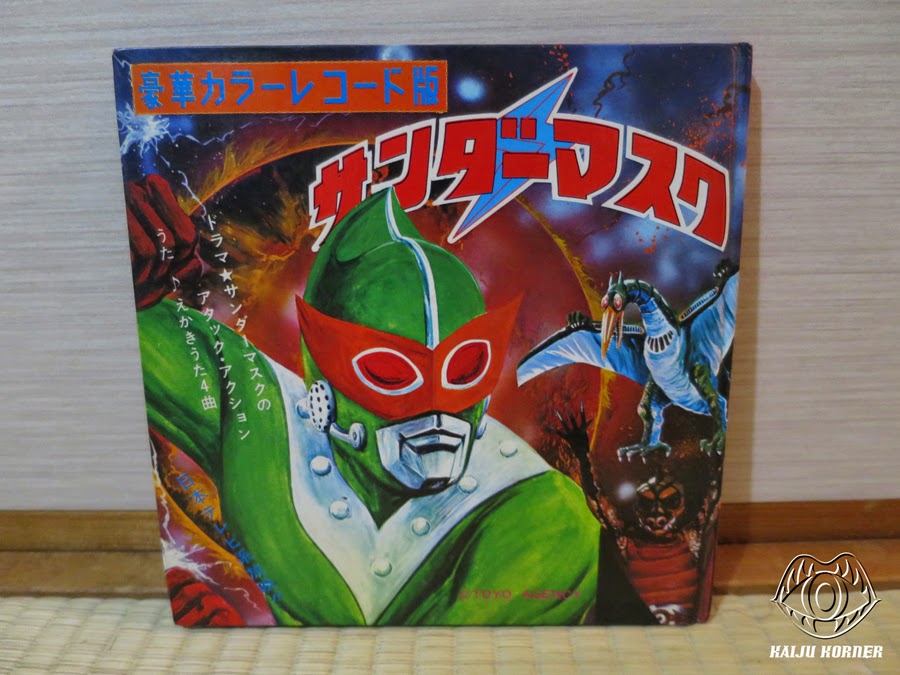 Kidoverses are like lattices, with TV shows and cartoons leading to toys, clothes, books, and so on. The companies that make these goods often have multiple licenses, producing items within and across content types.  So you'll see a company like Popy making Barom 1 toys, Great Mazinger figures, and so on. They'll sometimes do crossovers, with multiple companies working together to put out a mixed media set. Then there are store exclusives, limited releases, boxed sets, and on and on. Find enough dots, and you see that everything's connected somehow.

With modern toys, it isn't too difficult to put the pieces together and see what came from where, when, and even how. Vintage toys present a much larger set of challenges, with less documentation and clear information. So when collecting 40-50 year-old items, you often become a detective trying to figure out how many figures are in a series, when they were released, etc.

One of the fun things about the 1970s Japanese kidoverse is the massive variety of things made for the children of the burgeoning middle class. You had some of that in the West as well. Then of course in the late 70s, Star Wars turned everything on its head, making soap and toothbrushes viable crossover candidates.

When toy shopping in Japan, you never know what you'll come across. So here's the first installment in what I'm calling Vintage Discoveries.

This is a Thundermask book + record set with some really cool features. It was put out by a company called San Kikaku.

Here's a look at the back of the set: 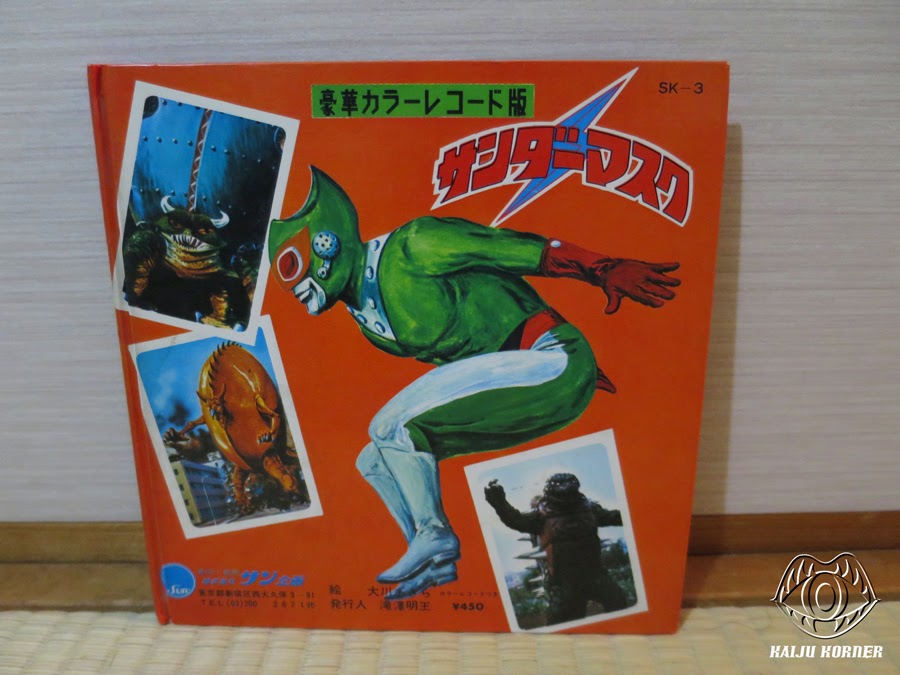