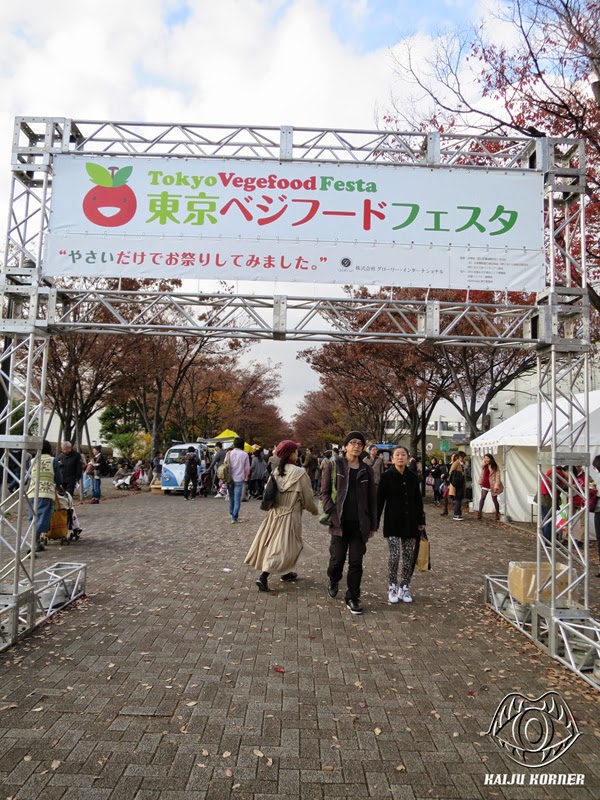 This weekend at Yoyogi Park in Tokyo, a small but well attended veggie food festival was held. (The much larger Spain Festa going on nearby was huge.) At the Tokyo Vegefood Festa, there were a few dozen stalls selling Indian, Japanese, Taiwanese, and other types of veggie, vegan, and macrobiotic food. 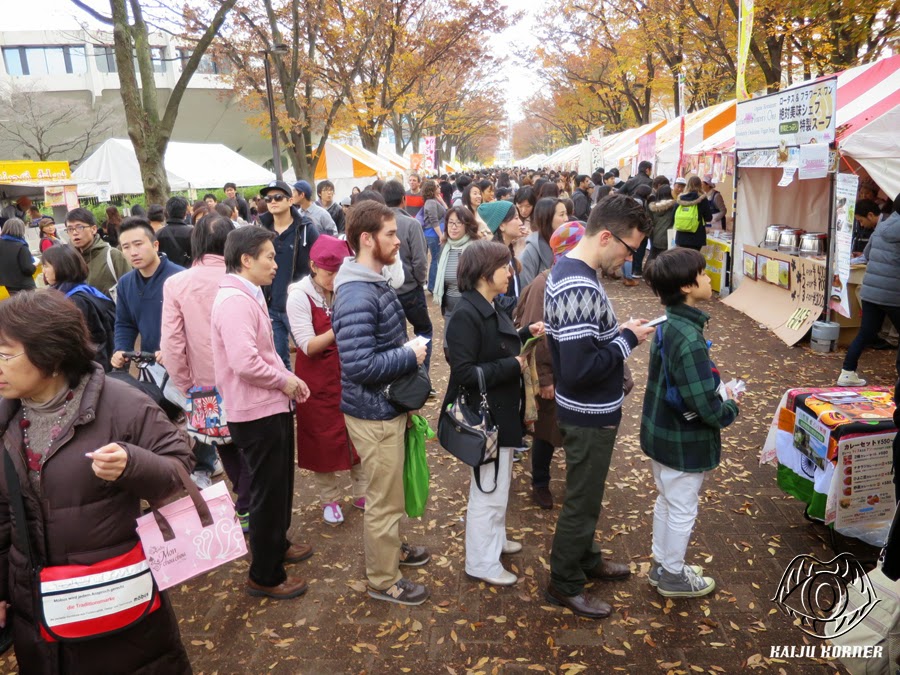 Events like this are rare in Japan, so it was nice being able to walk around and try food from different vendors. 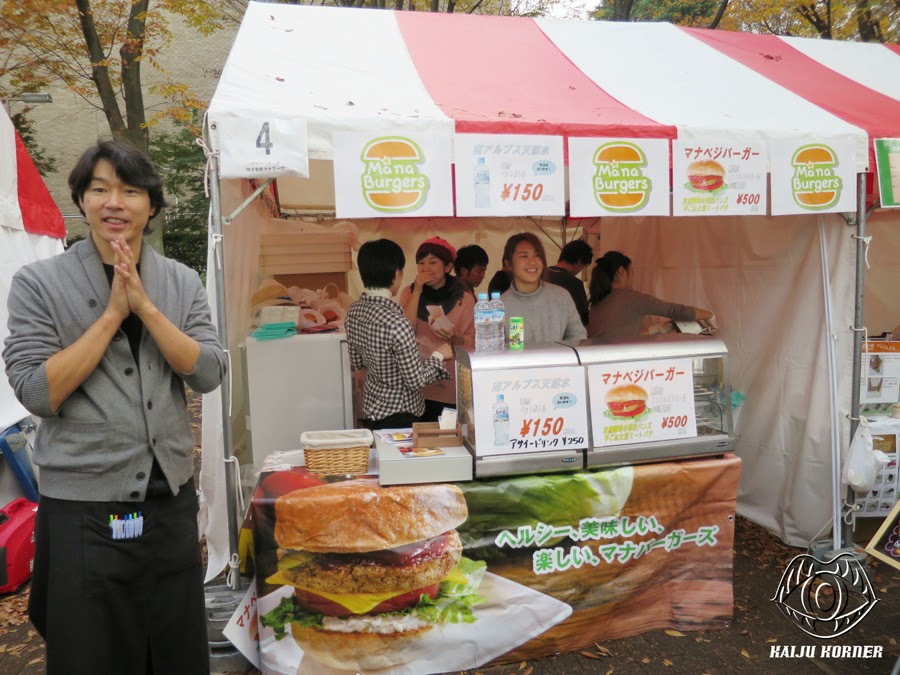 Most of the food was good. Portions were small, though. On the bright side, that made it easier to sample a number of stalls. Some things were reasonably priced, while others were out there, even for Japan.
More after the jump: 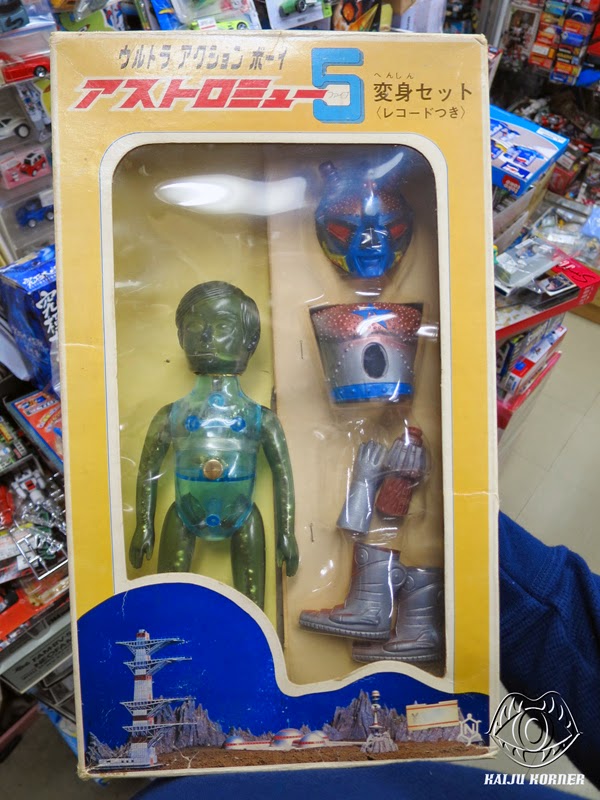 Astro Mu is one of those vintage lines that excites and confounds collectors. The legendary toys are important in the history of tokusatsu and other 70s toys, and homages continue to appear in modern indie toys. Finding them loose is difficult enough. One rarely sees them complete. Seeing a boxed example has become a once in a blue moon event. So when I saw one boxed and unused recently, I considered myself lucky. Fortunately I had my camera and was allowed to take detailed photos, which I thought would make a nice viewing and reference for fans and collectors. 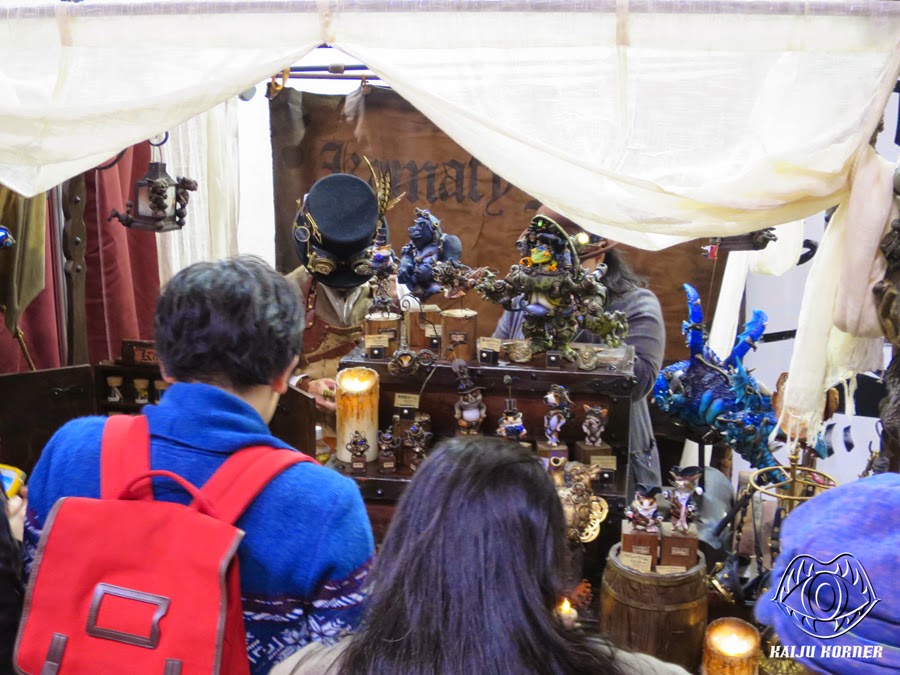 In my report on the indie toys of Design Festa 40, I touched on the explosive growth of Steampunk in Japan. Besides people in full-on Steampunk outfits, there were a number of booths selling things like accessories, jewelry, and toys. 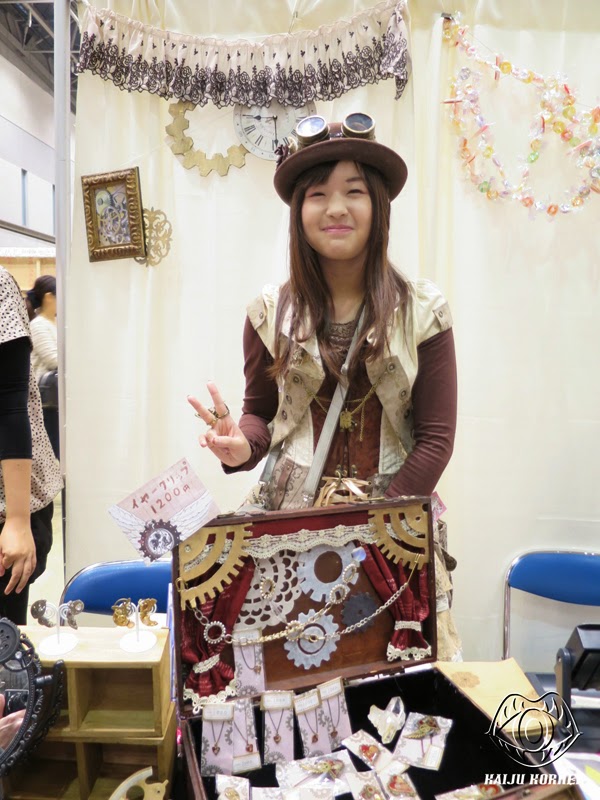 With full and upfront admission that I'm not an expert in the area (so apologies in advance if some of the images don't fit exactly in the genre), here's a look at more of the Steampunkery of DF40. (I've carried over a couple of the pics from the indie toy report.) 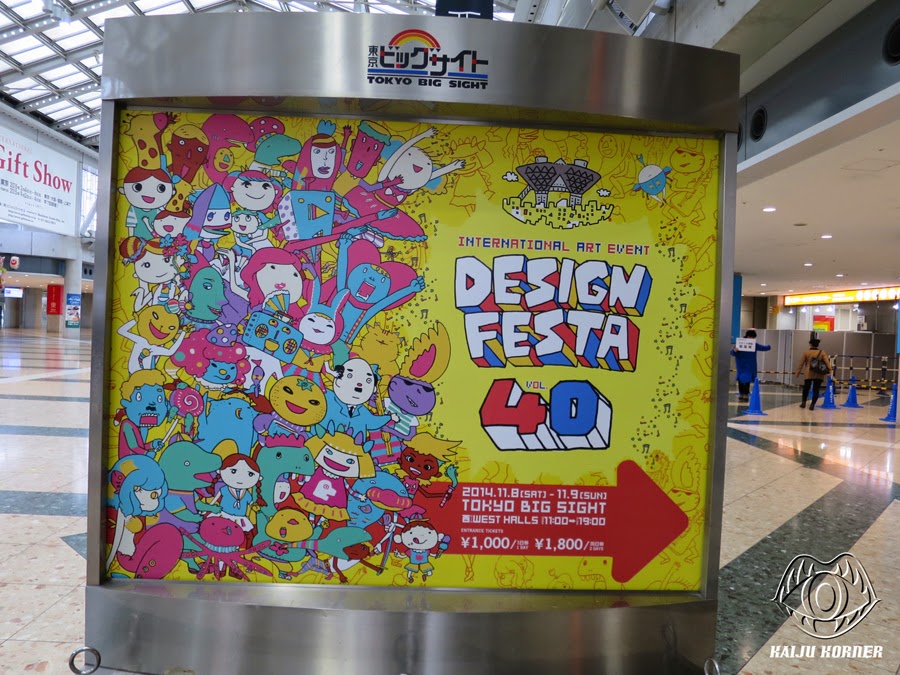 Welcome to the Kaiju Korner indie toy report for Design Festa 40. As always, booths will be arranged alphabetically. That's to make it easier for you to find the pics from your favorite toy makers, and it creates a better reference for the future if people want to go back and see who did what at past shows.

One thing I am doing differently is expanding the spectrum by including makers that we don't normally focus on. I feel we tend to get too myopic when looking at indie toys - so 80-90% of the makers are the same at every show, with a couple of debut makers and infrequent exhibitors added for good measure. But that can create a sort of tunnel vision when what you see is too prescripted or limited. It can create a false sense that collectors should only be looking at a narrow range of "seal of approval" makers or toy materials.

So let's see if we can break apart or at least expand that model a bit. Recently I've noticed some fantastic work done with needle felt toys and other materials, so I'm going to work in some unfamiliar names this time. Let's see how it goes. 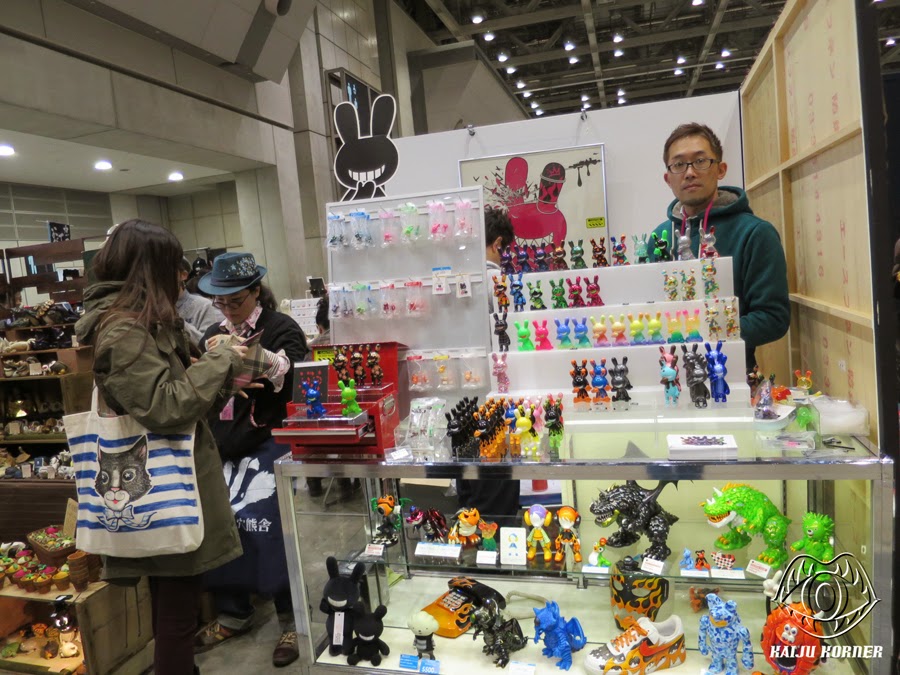 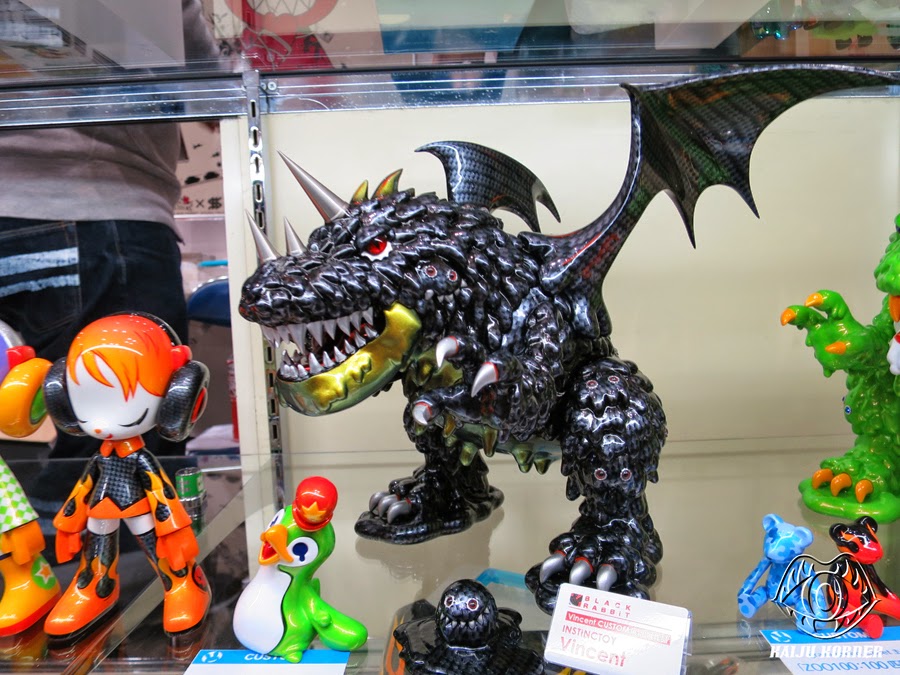 After missing the previous Design Festa, I was interested to see how indie toys were represented at the show. There were a few big trends. First, the booths were spread out around the Big Sight, but mostly in clumps. So on the 1st floor you had the old school crew - Max Toys, Blobpus, Yamomark, Sunguts, and Pico Pico - all together again, and they were in eye shot of Marmit.

Then on the 4th floor, you had the long Jungle table (representing many toy makers) right next to the Rampage booth. And then there were a few other booths like Chima scattered around the Big Sight. Personally, I liked it better when most of the toy makers were together, so we'll see if that might happen again in the future.

Another trend I noticed is how interlinked makers within these groups are. So in the Max Toys + friends group, you had makers customizing one another's toys, accessory makers putting things out for multiple lines across companies, and so on. Over on the Jungle table, although many different makers were there, it had the look and feel of an umbrella brand.

A final note I'd say is it's becoming clearer to me that the separation between Japanese sofubi and American sofubi is becoming stronger all the time. At the Rampage booth, you had a bunch of different Western toy makers represented in some way, by an American toy seller. But for the most part, that was it. Recently at SDCC and NYCC, I got the opposite sense. There were very few Japanese makers there at all (Gargamel was a big exception at SDCC).

My sense is that's because the American indie toy scene has grown so much that there are plenty of makers at US events to fill booths and find customers. At the same time, Japanese makers know what their local customers like, and there's plenty of product put out at shows and through other channels to meet that demand.

Of course it isn't black and white. There is still plenty of interchange, especially with Japanese toys making their way overseas. And there has been a lot of movement with the attention that D-Con is getting for toy makers from all over the place. But in general right now I'd say we're looking at a mature market. It's downright easy for Western designers to get their toys made in sofubi, so all those old channels and gateways have come tumbling down. With sites like Big Cartel, "lottery" sales via e-mail lists, and so on, it's easier than ever for makers to find collectors. So if you can't get a hold of new stuff from one place, there's plenty of other stuff on the other side of the world to catch your attention.

Anyway, that's just my sense, and maybe the longest preramble I've written for a show. Next up, indie toys at DF40. 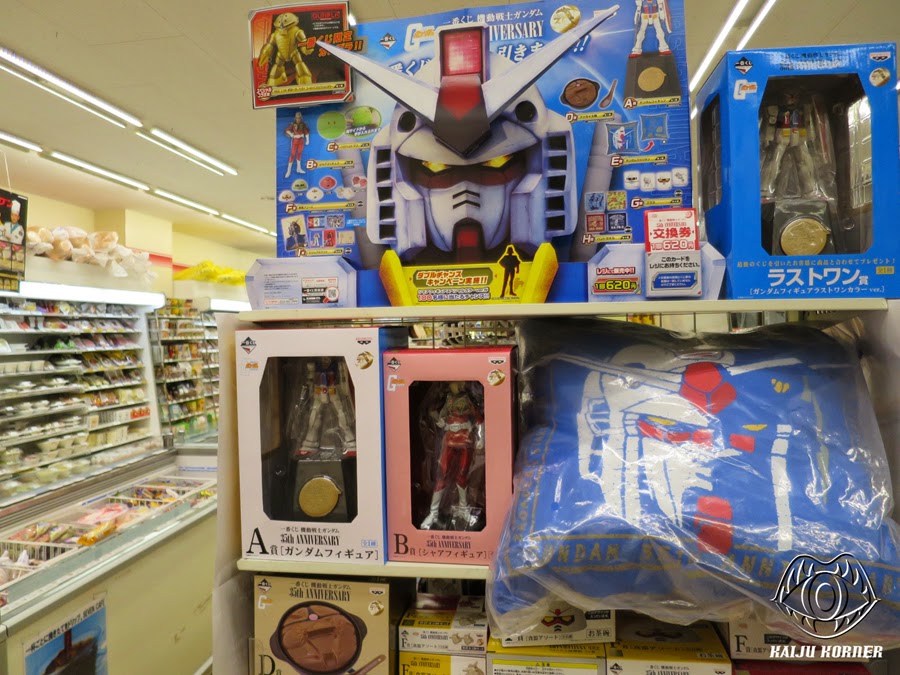 For decades, Japanese convenience stores have been big players in the kidoverse. They've been the home of exclusive toys and packaging variants, countless shokugan releases for candy, chocolate, and other snacks and drinks, as well as seasonal and anniversary promotions. 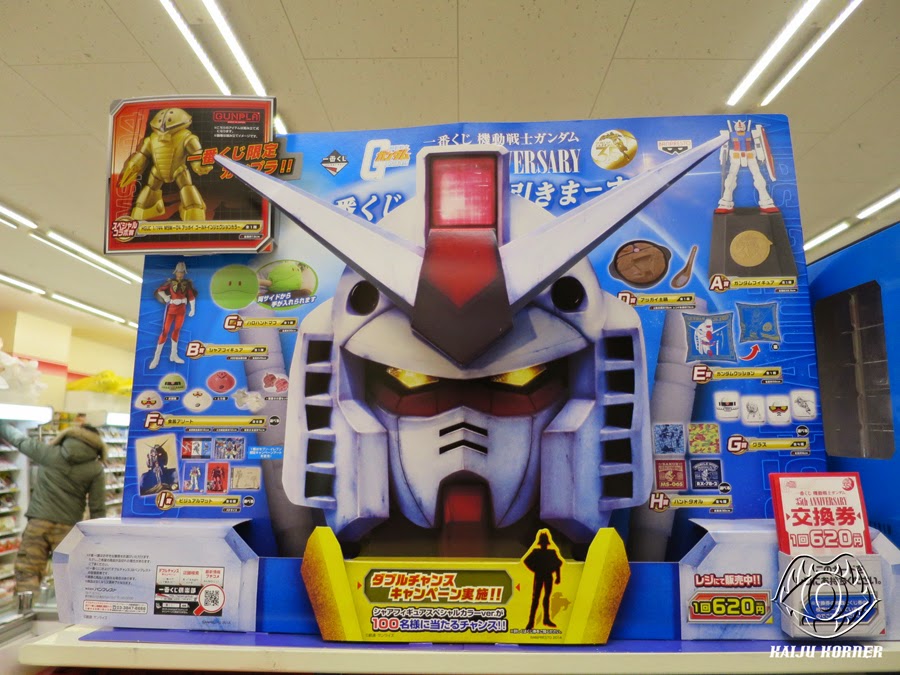 7-11 has an ongoing Gundam 35th Anniversary promotion There are toys, a super cool spoon + bowl set, and other Gundammy goods. 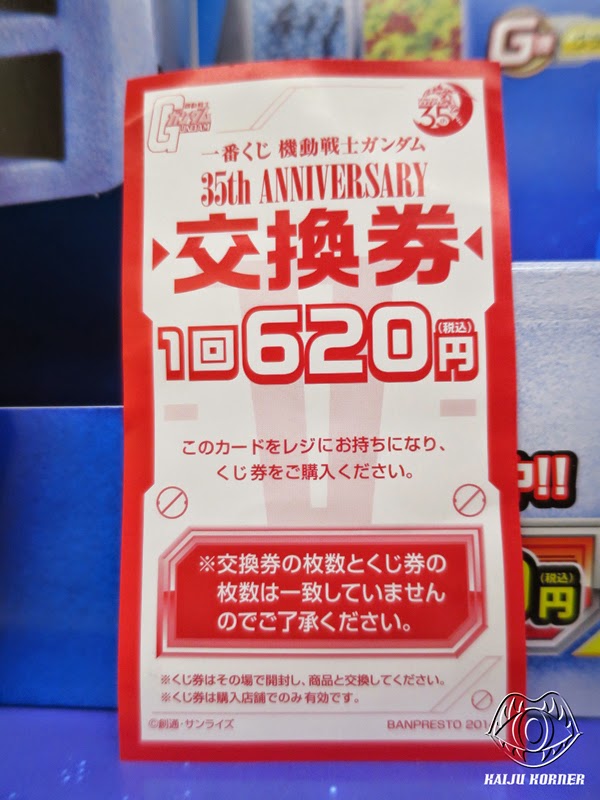 From what I can gather, it's pretty straightforward. You take one of these tickets to the register, pay 620 yen, and randomly get one of the things on display, based on the letter you pull. At least that's the way they've handled these types of promotion before.

Here are some of the potential prizes: 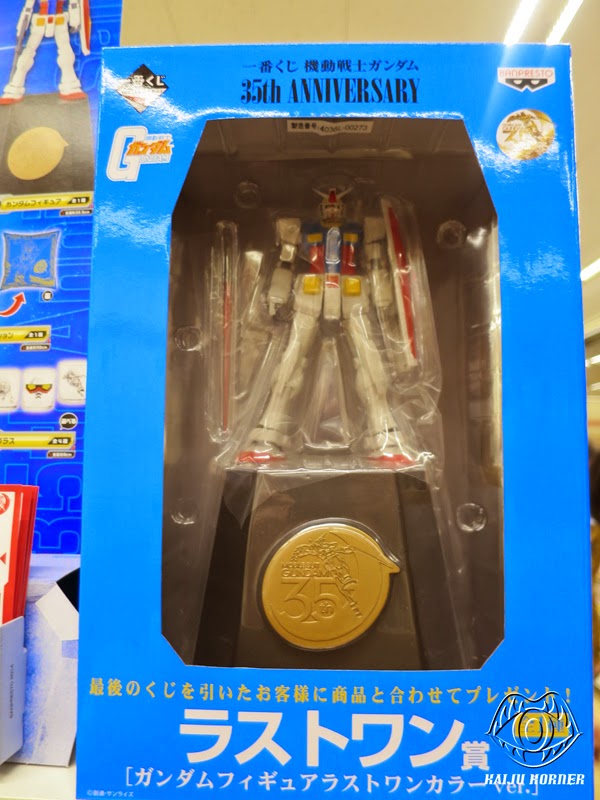