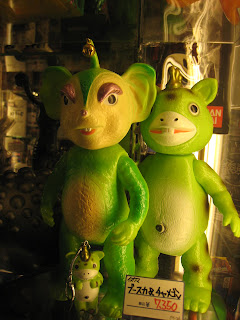 Rebel Inks spotted at Secret Base

Some snaps from the Base: 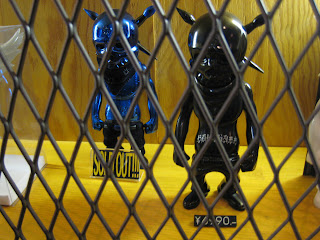 Spotted at the 1/6 Medicom flagship store: 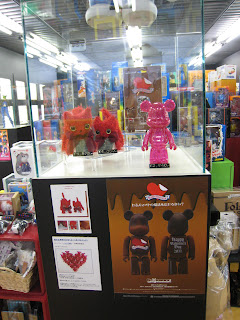 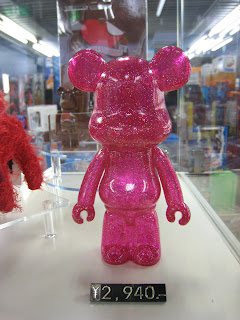 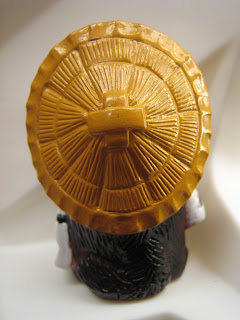 This is Real Head's take on Tanuki, a famous mythical character from Japan. Along with Peko-chan (little girl mascot for candy company) and Sato-chan (orange elephant mascot for pharmacy), Tanuki is one of the most ubiquitous images in Japan.

You'll see statues of the folklore character in front of many restaurants. You can also read about a Tanuki in the famous children's story Bunbuku Chagama, which is one of the first stories I read. (You can pick up a copy for aronnd 200 yen in front of most bookshops. It's great reading practice and written at a 5 year-old's reading level, with very little kanji.)

Anyway, back on track. RxH's Tanuki is a one-piece mini - about 2.5 inches tall. Mori said we might see the first release version within a month or two. It will be interesting to see if RxH carries on with more mini folklore characters like Kappa, Oni, or Kitsune. Good times ahead! 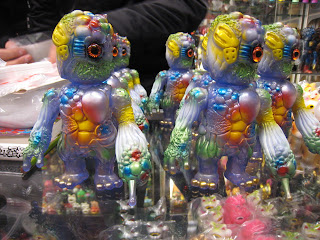 Beautiful Chaos released today. The figure is on a clear purple body with a complex design and nice color balance. The paint app pretty much has it all: matte and metallic paints, solid sprays and fine mists, and gorgeous color transitions and oversprays. It all works together really well, and you can almost read a "Chaos Mook" in the figure, with design elements from 2005-11, across the history of the figure.

Visit to Cosmo Knight Alpha (aka The Bemon Shop) 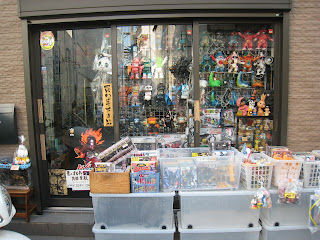 Cosmo Knight Alpha is something of a venerable old school toy shop. It's small, packed to the rafters with toys, and known as the "place to get Bemon figures." 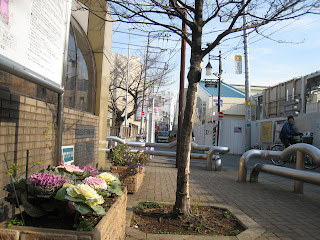 CKA is located in Ekoda, a sleepy place on the Seibu Ikebukuro line (3 stops from Ikebukuro). The shop mostly sells vintage kaiju and indy sofubi. It's also the place where, in the past anyway, you could roll up with a tiny shot at getting a Bemon. Well, that's not so easy anymore. There's no telling when new figures will drop (it's not even clear that they're being sold through the shop anymore).

Some are sold via "official" auctions on Yahoo Japan, such as a recent Two Head that went for a fortune a few days ago.

The moral of the story is go there to check out previous releases, but don't expect to find any for sale. That being said, there's tons of other sofubi to choose from. Plus, the display case is awesome. 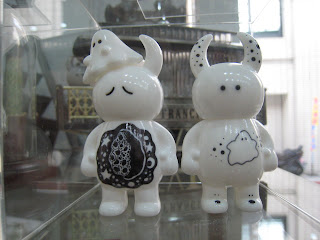 Email ThisBlogThis!Share to TwitterShare to FacebookShare to Pinterest
Labels: Uamou

Max Toys figures spotted at One Up (Nakano Broadway) 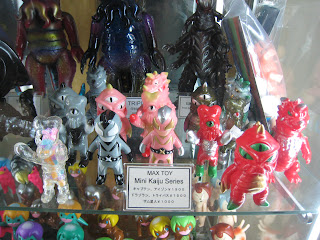 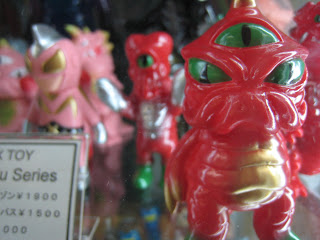 Winter Wonderfestival (Feb 6) is just around the corner! News from companies is pouring in, and the range of offerings keeps growing! Here are the planned Max Toy WF releases:

Spotted the other day.... 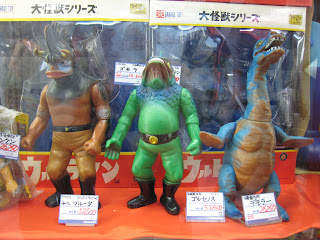 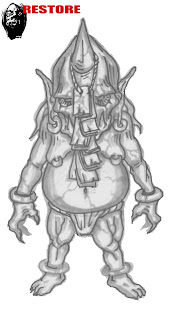 Abe from RESTORE sent us this illustration of one of his characters that he hopes to turn into a sofubi figure. If all goes as planned, the strings of paper hanging from his horn will be made of paper!
Posted by andy b at 11:10 AM No comments:

Email ThisBlogThis!Share to TwitterShare to FacebookShare to Pinterest
Labels: RESTORE

Coming up from US Toys!

Our friends at US Toys sent us these pics of upcoming minis. They'll be released at the 2011 Winter Wonderfestival on Feb 6.

Land of the Gigantor Playmobil Toys!

I guess a lot of Japanese collectors are really into Playmobil! Which is cool since it looks like a great line. Here's another shop set up, at Nakano Broadway: 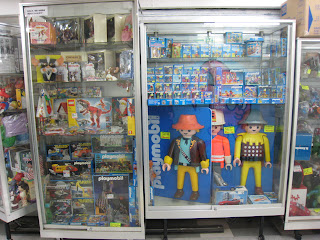 Spotted some really cool Rainbow toys at Mandarake. I love the integration of the abstract and the more "standard" forms/bodies! 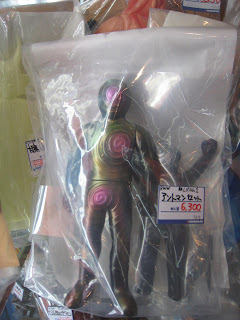 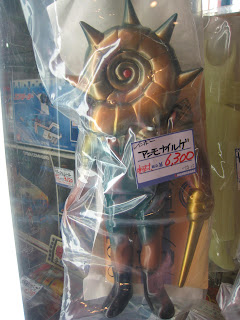 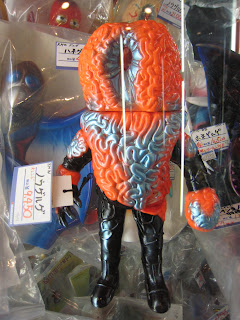 The various Mandarake shops sometimes put up really cool displays in their front windows. Sometimes the toys have price tags, so I guess they're for sale. Other times it's just a bunch of toys up on display. Of course, over the years sofubi collectors have drooled over the Not For Sale indy sofubi displays at the Shibuya and Nakano branches. 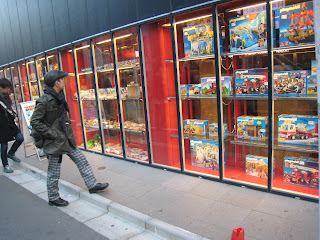 Here's the newest window display, which I thought was pretty cool: Playmobil. 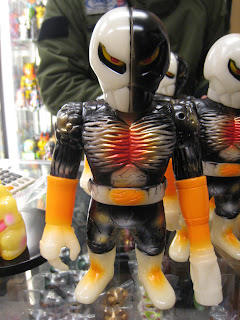 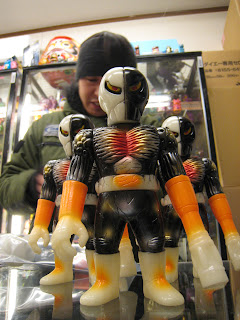 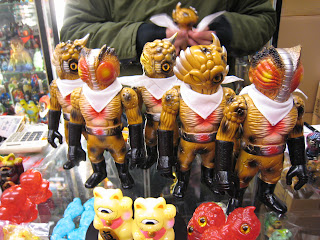 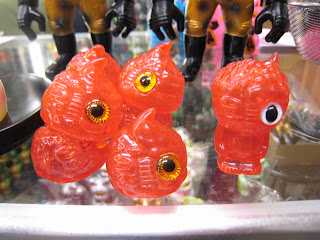 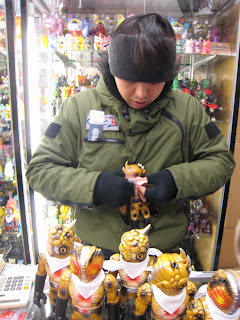 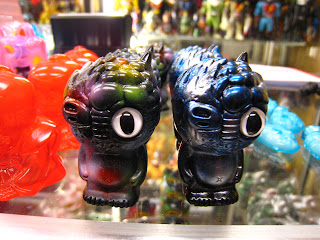 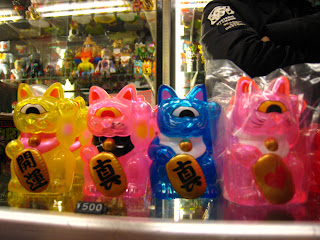 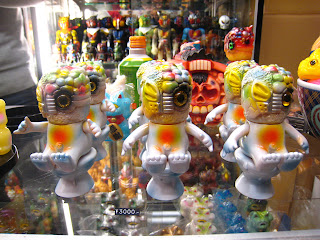 File this one under J-pop culture.

I've learned you never know who you're going to see in Nakano Broadway. This afternoon I met Hard Gay standing in front of a shop across from Bow Wow. He had a TV crew with him, so I think they're puting together a piece.

I asked him, "Anata wa Hado Gay desuka?"
He answered, in English, "You know?"

LOL, then I snapped a couple of shots. I think the film crew took some footage of me talking to him, so it might wind up on a TV show. :p 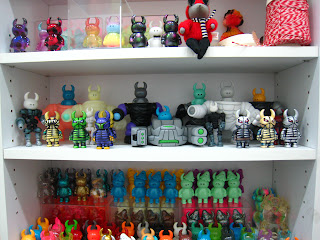 The other day, I paid a visit to Uamou (Ayako Tagaki) at her studio. She showed me some customs sent to her by the forces behind Glyos and Callgrim and was kind enough to let me snap some shots.


Lots of closeups after the jump.
Read more »
Posted by andy b at 6:30 PM No comments: 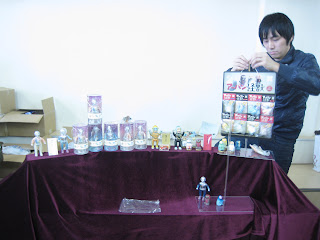 Ilu Ilu has created a lot of buzz in the sofubi world since his debut appearance at yesterday's Superfestival 55.
The figures are about 5" tall. The arms, legs,and head are articulated. Altered Man comes with additional inserts you can pop in and out by separating the figure at the waist. The inserts are reversible, so you get a total of four different chest designs. The figure also comes with a clear, removable helmet.

The subtle detailing on the figures is impressive. (For example, Altered Man is wearing tennis shoes!) The mini figures are meticulously sculpted.
Ilu Ilu is a one-man operation. The figures were sculpted and painted by one guy - 扳口明宏 (Akihiro Sakaguchi)- who lives in Kobe. He also designed the packaging, which is impressive, especially for Neo Gorilla and the 8 mini figure set. 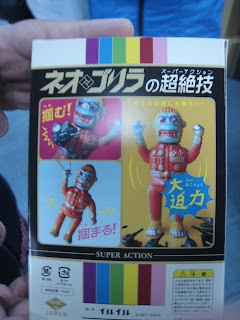 I was told Sakaguchi-san works as a professional packaging designer. This is the kind of creative synergy I love. We're lucky that his knowledge of software, materials, and production methods is being put to great use with his new sofubi line!
Here are the original prices of the figures:

I asked when his next show would be, but he wasn't sure. Hopefully soon!