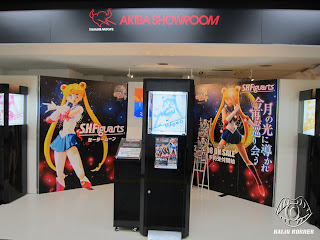 Here's a look Bandai's latest Tamashii Nations exhibit of its new and upcoming figures. The exhibit changes pretty often and is in a room in an underpass beneath the train lines. The passageway connects one side of Akihabara with another.

Once again, the toy titan shows the breadth of its product line with figures from Sailor Moon, Kamen Rider, Dragonball Z, Ultraman, and on and on. 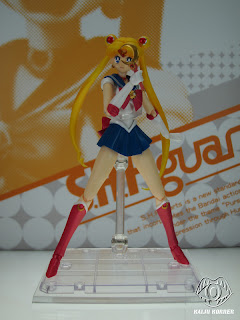 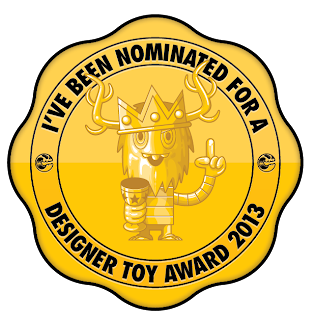 We've been nominated again for the Design Toy Award for best blog. KK is certainly more niche than other mainstream sites, and we expect to be that horse you see way in the back when the lead beast crosses the finish line, but it's nice to be recognized, and we appreciate the nod.

This is maybe a good time to note that over the last 6 months or so, 100% of the content on KK has been original - meaning the photos and videos you see here were all taken by me, with apologies  again for the shaky videos. HD they may be, but sure and steady they ain't!

Click here to head to the DTA voting site, gaze upon the gigantic list of nominated blogs, spot the one you think will probably win, and then maybe vote for us anyway. 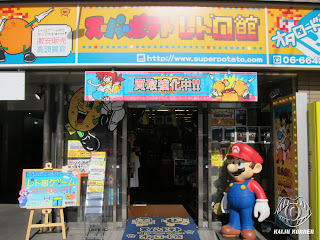 Super Potato is one of the newer shops in the Nipponbashi area of Osaka, where you'll find a bunch of toy stores, video game shops, maid cafes, etc. It's basically Osaka's equivalent of Akihabara. Super Potato opened this branch of its growing chain of stores in April, 2012. I just visited for the first time and thought it was a pretty cool spot, so I did a walk through video shoot.

Sorry it's kind of shaky at times. Still using my Canon S95 to shoot video. Haven't had a chance to upgrade the equipment yet. Below the video I'll list some store details.

I asked, and the shop does sell stock online, but unfortunately at this time they don't ship outside of Japan.

Check out my YouTube channel for lots of other store visits, toy maker interviews, and other random goodness.
Posted by andy b at 10:50 AM No comments: 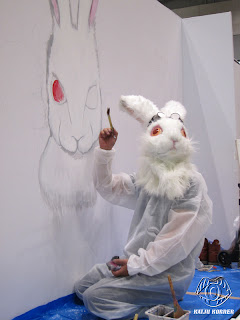 Today's Design Festa saw quite a lot of activity in the indie toy world. The show was eclectic, at times confusing, and sometimes downright chaotic. That could be because we've entered round peg/square hole territory. As we've reported, over the last couple of years DF has grown in stature in the indie toy world - mostly, I think, because of the demise of other shows like Pachi Summit, and WCC, WHF, along with the closure of Kaiju Blue and overall decline of the custom show/gallery circuit.

So DF became more and more prominent toy wise, and for a while there was some order to it all as the indie makers were mostly clustered in one area. This time around, that fell apart. There were a few booths alongside one another (Max Toy, Sunguts, Yamomark, + Blobpus), but most others were scattered all over the Big Sight. On top of that, some customs and releases were brought out at random times, and there was a lot of booth sharing, which is cool but it took a lot more figuring out what was whose and what was up.

Having said all that, if you put on your walking shoes and stuck to it, there was quite a lot to see. A number of makers debuted for the first time, there were new sculpts released and protos revealed, and in general folks seemed to have a good time.

Here is probably my largest ever DF report, with more than 200 photos, arranged alphabetically by maker. I've added links to the websites/Facebook pages/blogs of some of the newer makers. 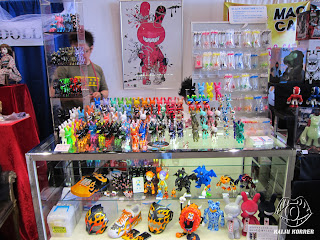 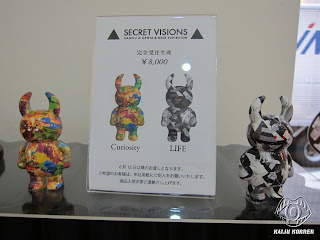 Shots I took the other day at Studio Uamou. Lots of new figures, collabs, and even an ongoing exhibition. 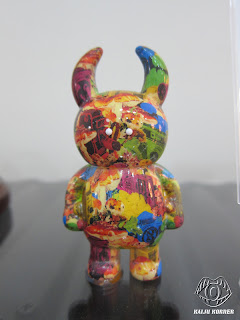 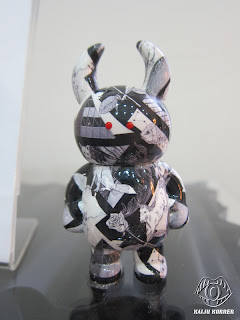 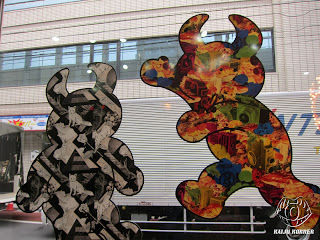 New from Secret Base 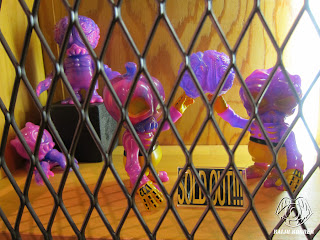 Shots from my recent trip to the Secret Base shop: 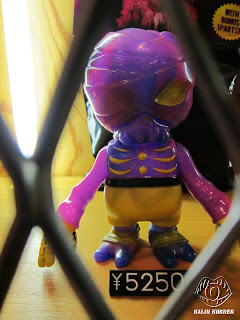 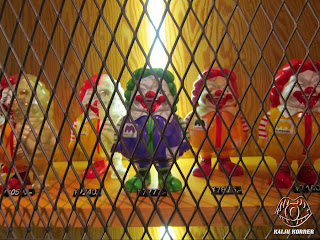 New customs at One Up Akiba 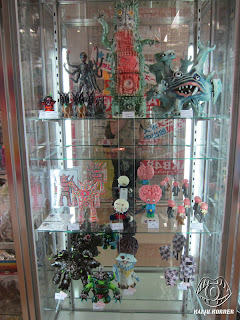 Some fantastic new figures at One Up Akiba by Zenith, Todd Robertson, Pico, Pico, and others,: 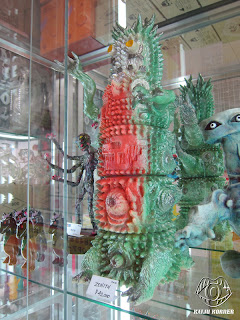 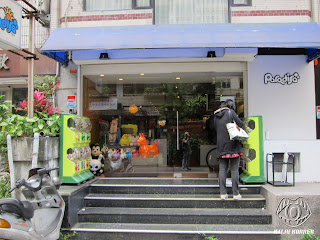 Paradise Toy Land in Taipei has some nice indie toys available. International shipping is OK, and ordering or writing to them in English should be no problem.

Here are some pics of what they have: 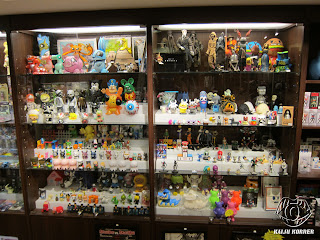 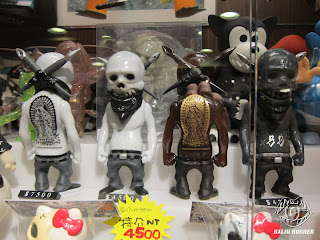 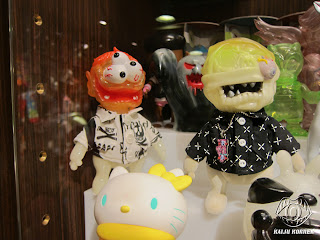 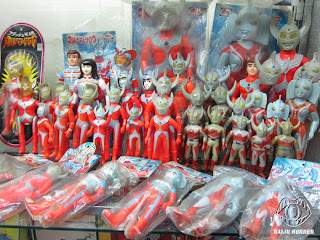 One of the coolest things at each Super Festival is a special exhibition set up in one of the event rooms. Unfortunately, these displays don't tend to get as much attention as the dealer tables and set ups in other halls. I think that's in part because the exhibits are in the same room as the "talk shows" featuring tokusatsu dignitaries from classic and newer shows. In fact, sometimes the theme of the exhibit coincides with one of the event's speakers. But the focus of the people in the room is on the speakers, and there's little foot traffic otherwise.

So, though not quite as high on the radar as some of the other SF happenings, I've been trying to highlight these exhibits in separate posts, since they can be spectacular in their own right. Super Festival 62's exhibit focused on Ultraman Taro, which aired on TV from 1973-1974.

In two large showcases, there was a cornucopia of Taro related merchandise, from toys to books to lifestyle products like slippers. It was almost a time capsule of what you might find in the room of a young Taro fan in the 1970s.

Here are some pics of the display: 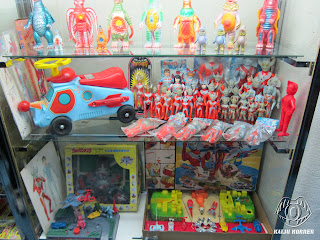 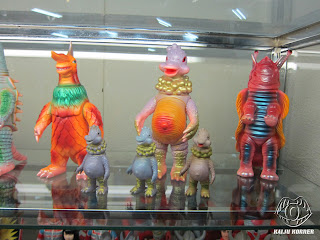