First, a bit about the naming of things. "Pachi" means "fake" in Japanese, and "pachi kaiju" either refers to bootlegs of movie, TV, or print monsters. (The term is also sometimes used, in a derogatory sense, to refer to indy sofubi.)

Pachisummit events typically start with a 1-1.5 hour-long show, during which people order drinks and food (and collect lottery ticks in the process). After the show, there's a lottery draw, and a lucky few get free toys supplied by participating sofubi makers. Finally there's a toy bazaar, where toy makers release short-run figures. Click here for my report of a previous event.

OK, so that's a typical Pachisummit. Today's was basically Part 1 only. Tickets were 1,000 yen.

We knew in advance there wouldn't be toys, and one wondered if that would affect turnout. But as it turned out, the place was absolutely packed with more than 50 people filling every seat in the tiny bar. Looks like people were really into it (especially the opening 20 minutes), which shows the event's draw goes beyond hardcore indy toy collectors. 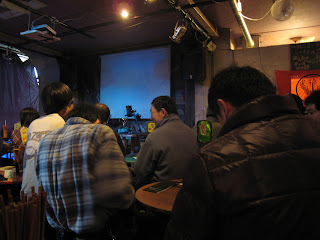 
The show started with a B sci fi film from the 60s-70s. The panel showed 30 minutes of the film while providing commentary. The movie was all in Japanese, but the dialogue really didn't matter. You had a scientist, a foreign reporter, evil baddies with sunglasses, dudes in cheesy spaceman suits, human/beast hybrids with rubber appendages, rockets, pistols, and kaiju inexplicably appearing to wreak havoc. It was fun, but 30 minutes was a bit much. Film snaps: 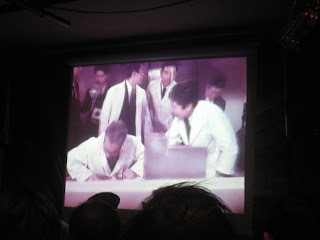 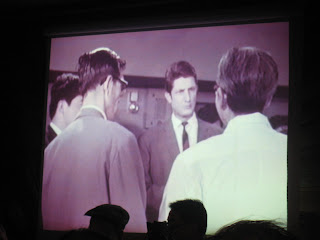 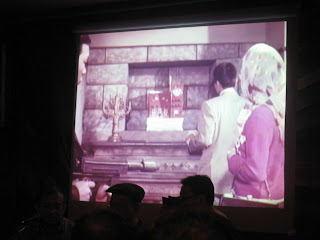 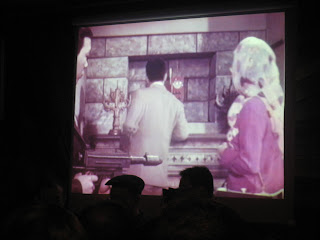 Following the movie, the panel had a 15 minute discussion, but it was tough to follow without slides or props.

Next was what looks like an advert of a DVD of some craziness from previous Loft One events, and then a long side show advertising upcoming events at Loft One.

Next came a talk show, featuring a running commentary on some text (maybe an article or story) they put up on the screen and read aloud line by line. From what I could gather, they were talking about characters from old TV shows. Lots about Kamen Rider, Ultraman, and Astro Ace. That lasted 40 minutes.


Next they played 4 or 5 funky old songs off a a cassette tape. Sounded like old cartoon or movie themes.
Next was another cassette which sounded like someone practicing Kamen Rider kicks, and then a DVD showing outtakes from a 70s action Kamen Rider TV show. 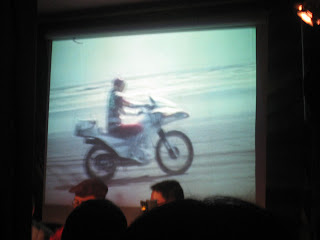 Then another cassette tape was put on. After that, a break in the action. That's when I made my exit.

I love the concept of the event and really enjoyed the last one I went to, but not only were there no toys this time (not in the first 2 hours, anyway), but the "talk show" was like seeing the Rocky Horror Picture Show, and instead of audience participation, everyone sat and listened to the commentary. Then it was like watching a Power Point presentation where the presenter reads the slides. Anyone who's been to one of those knows what that's like.

I look forward to attending future Pachisummits but will definitely make sure there are toy releases on the agenda! ;-)
Posted by andy b at 2:09 PM