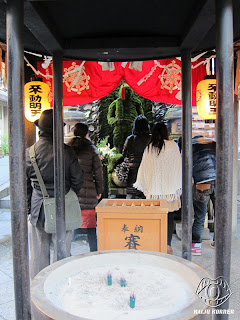 Hozen Temple (Hozen Ji) is one of the most fascinating sites I've come across in Japan. Though I later learned it's very famous, we stumbled upon the temple quite by accident during an afternoon stroll around Osaka. But that's the way a lot of my Japan experience is unfolding - organically, and not by mapped-out design. 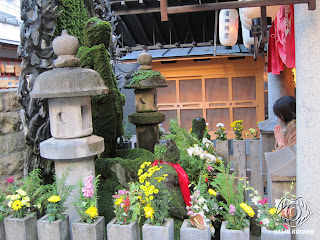 Organic is perhaps the perfect word to describe the temple, which is situated in downtown Osaka, in the Dotombori area. In toy hunter's terms, it's just a few minutes north of the Namba district, which houses Astro Zombies, Hiro Gangu, etc. The temple itself is very small, and it's surrounded by bustling alleyways and a constant stream of pedestrians either on their way to work, heading to one of Osaka's endlessly long covered shopping arcades, or maybe walking to Dotonbori-gawa Canal (well-known as the site where elated Hanshin Tigers fans tossed a statue of Colonel Sanders into the river in 1985). 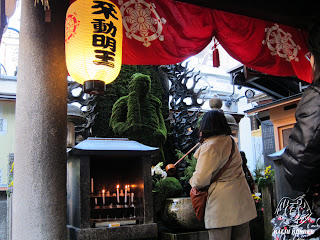 The central statue at the front end of the temple is of Fudo Myoh (Immovable Wisdom King), a Buddhist deity also known as Mizukake Fudo (immovable when water is thrown on).

Speaking of water, the reason the statue is green is because it is covered by moss, a state engendered by a steady stream of worshipers lining up to pour water on Fudo Myoh and adjacent statues. I found it rather moving that the devout are actively contributing to maintaining the ever-growing nature of the statues. 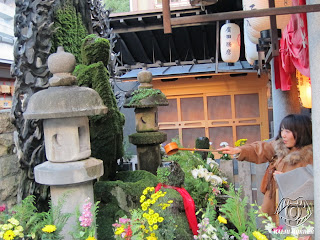 Here's a video I shot of the temple:


To people traveling to Japan, I'd recommend setting aside "non-planned time" for unexpected encounters like this. If you're in Tokyo, plot a course to the Mandarake Complex and Third Uncle (I hear there's a good map on the Interwebs for that), but leave some unplotted time too. Sometimes the walk from the train station to a destination is the most interesting part of a trip.
Posted by andy b at 1:26 AM