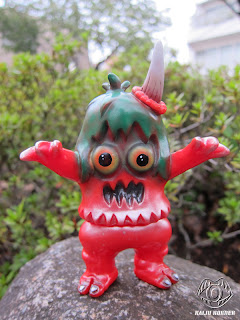 Ugly Unicorn is the first sofubi toy from Rampage Toys, a one-man operation run by Jon Malmstedt. This fun little figure, which debuted last month, stands 4" tall from horn to hooves. The first painted production figures were released as limited runs at Superfestival 57. Here's an up close look at one of those versions, called "Poppy Goji Ugly.".


Source
Jon was drawing and painting Ugly Unicorn long before it became a toy. One of the things I like about the figure is the way the sofubi version transitioned nicely from Jon's original art. The toy preserves the figure's smooth, basic lines and surfaces, which is key for opening the figure up to all kinds of different paint apps down the line. In fact, Jon (who just got an airbrush some weeks back) has already started experimenting with a multitude of painting techniques, including working with fades on clear toys stuffed with tiny resins! 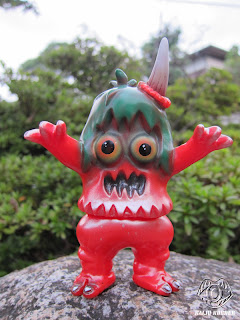 Here are some outdoor shots of Ugly in action, shot from different angles. The figure stands in the classic bonzai pose. In the tradition of many minis from sofubi lore, it's articulated at the waist. . 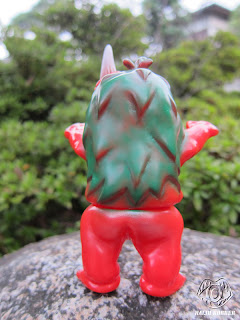 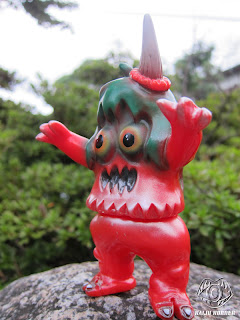 A couple of shots showing the figure's articulation: 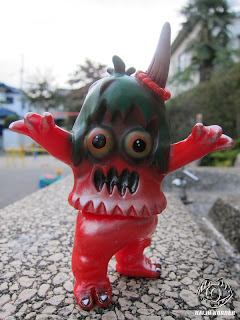 More shots:
The eyes are a key feature of the figure. Because they're smooth and slightly bulbous, instead of recessed, it means Jon isn't limited to what he can do with the face. Since the eyes are painted on, he can work in a variety of expressions. That's another feature I really like.


Jon sells Ugly Unicorn and other Rampage Toys on his Big Cartel page. Also, the figure has already made an appearance at Superfestival, NYCC, and Tara McPherson's shop Cotton Candy Machine. Not bad for a brand new figure! To read more about Jon's resin and sofubi figures, as well as his wall art, click here for the Rampage Toys blog.


Well, I hope you enjoyed the latest installment of KK Reviews. If you'd like to send in your sofubi toy for review, drop us a line: kaijukornerandy@gmail.com
Posted by andy b at 6:01 PM