Chaos Stereo 1 and 2: Side by Side 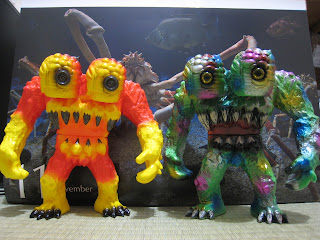 Chaos Stereo is a mash up of Nerd One's Stereogon (the body) and Real Head's mini Chaos  It was an out of the blue collaboration between the toy companies that works so well it looks like the figure was originally designed that way.

I thought it might be fun to take some side by side pics of the first (and only two, so far), releases of this fantastic collab. 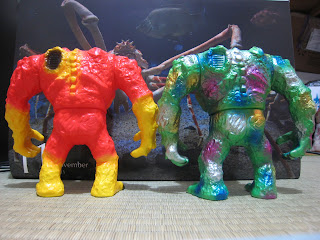 Next, we have some individual pics of each figure. I want to mention I replaced the lighting in my tatami room, (finally!) solving previous yellow hue issues. 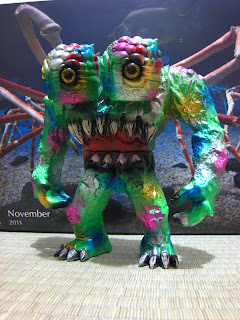 This was the first Chaos Stereo. It was a surprise release at Shinto Gangu on Dec 18,2010. I remember heading into the shop after walking over from Koiwa, and squealing like a school girl. There it was on the shelf, this green idol that looked like a blessing from the sofubi gods. There were 5 or 6 for sale. 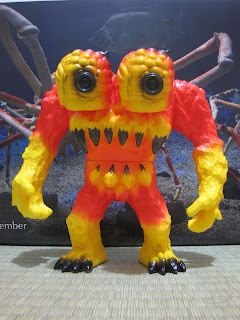 The next release was another surprise bombshell at the 2011 Wonder Festival (Winter). This one was sold at Nerd One's booth. The eyes are made of resin (nice nod to Nerd One's background as a resin designer). Each figure came with a numbered card. Limited to 12 pieces.
Nerd One's Stereogon is proving a very interesting and flexible character. Some of the best sofubi figures stand out even more because of their modular ability to mash with other designs. This is already at least the third set of heads we've seen for the figure. Of course, Chaos, an all-time classic, has shown itself to be extremely flexible and adaptable, across multiple sizes, figures, designers, and companies.
Posted by andy b at 1:19 PM

Email ThisBlogThis!Share to TwitterShare to FacebookShare to Pinterest
Labels: Nerd One, Real Head, Side by Side