Last night, I had the pleasure of taking the T to beautiful Jamaica Plain to visit with Brian Mahony, the mastermind behind GUUMON. I had a fantastic visit, and not only did Brian clue me in on all kinds of GUUMON news, but he sent over some awesome pics to share with everyone.

Let me start off by talking about Titanium, a new color application technique Brian is developing. It creates the appearance of an iridescent sheen flowing over a figure's contours. The effect is stunning. Here's a shot of the Titanium colorway applied to a Marusan Hedora: 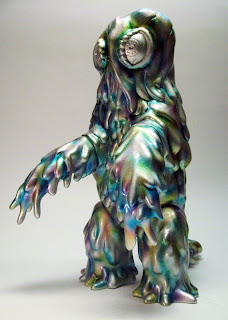 Next here's a look at Brian's workspace:
Speaking of new projects, Brian has not one, two, but THREE new toys in development, two of which are scheduled for release this year and the third next year. He'll also be submitting 6 customs to the FOE gallery for their upcoming Monster Mayhem show, which opens on May 11.

But that's not all! Brian is also cranking the Euro scene dial to FULL TILT by curating an upcoming event in the Netherlands called "Nederland MonsterJam." The show, scheduled to be held in Amsterdam in July, will feature customs by 18 artists. Geweldig!


Let's head back to the pics for a bit. Brian has a legendary toy collection which has rarely been shown publicly. Here's a shot Brian was kind enough to share of some of his amazing collection:
Now let's check out some customs. Here's a spectacular custom Daigomi: 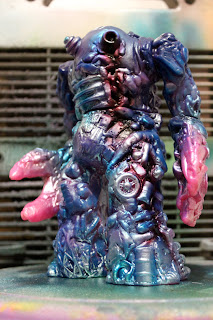 And a bunch more + an unpainted GID Daigomi that Brian gave me. So stoked! 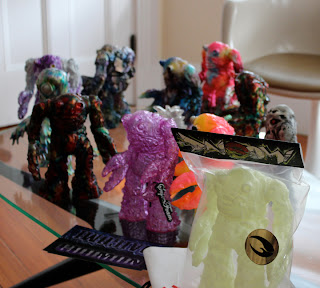 Next up here's a Grody Shogun En Man that Brian customized. I love the hair + jacket. All it needs are some high heels and lipstick. Then the question of "How much?" takes on a whole new meaning. Down boy! 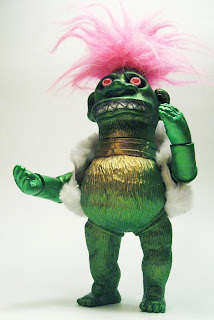 Finally here's a look at some figure dying techniques that Brian is working on, using a type of dye from Japan:
Besides all the above, Brian has so much more going on, including collabs with Will Long, Todd Robertson, and LASH (MVH). Oh yes, and a GUUMON x Kaiju Korner uber-limited Krunk collab is in the works. More news on that soon!


So that's an inside look into the world of GUUMON. Thanks again Brian + Wendy. You guys are the best!
Posted by andy b at 2:52 AM