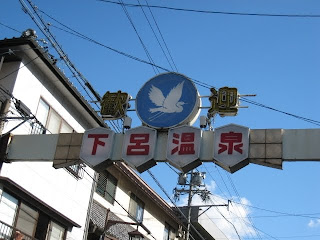 A few days ago, I left Tokyo in search of some rest and respite, to decompress from the twin towers of Taipei and Tokyo. I bussed to Takayama (about 5 hours from Shinjuku) and spent a couple of days there. It was a nice enough place (I'll blog about it in a bit) but not the quiet getaway I was after.

What I was really looking for was Gero, where I spent the better part of a day on my way from Takayama to Osaka. 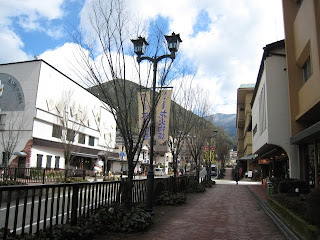 The small town is situated between Nagoya and Takayama. It's surrounded by mountains, and a sleepy river runs through it. 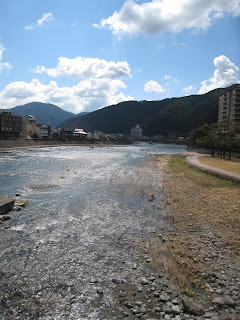 The town is very manageable on foot, though the hills and stairs can wear out your walking shoes after a few hours. It's clean, quiet, and pleasant, and the people have a generally welcome, small town disposition. 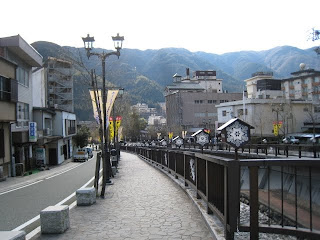 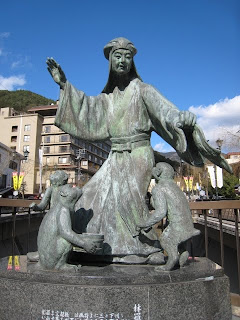 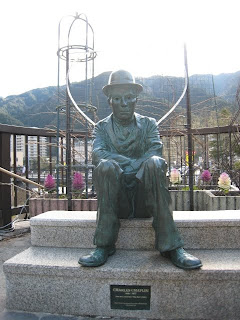 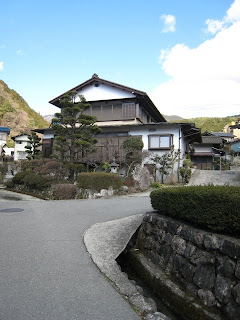 Of course, Gero's charms have not gone unnoticed. But what's fascinating is that whereas Takayama is overrun by Western tourists (I imagine the place must feature prominently in Frommers, Berlitz, and other guides) Gero seems to have mostly caught the eye of Japanese tourists.

I saw groups of young, middle-aged, and older folks ambling the streets and trying out the many foot soaking hotsprings. Interestingly, I didn't see a single Western wanderer during my daytrip.

Speaking of foot soaking, that brings me to the main reason I visited Gero: its onsen. 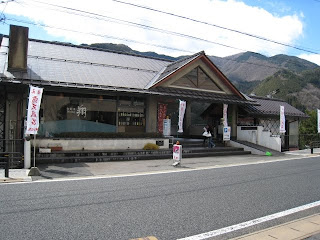 Normally, I'm not one for public baths, since I enjoy quiet and solitude as I'm boiling in the springs. But I decided to give this place a try. It's called Curegarden and is about a 15 minute walk from the train station.

The complex is pretty big (4 stories), and judging from the number of shoe holders at the entrance, it must be packed on weekends and during the warmer months. Fortunately, it was nearly empty when I arrived. Score!

Since nobody was using the baths, I was able to snap a couple of pics: 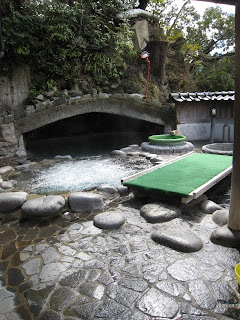 I like the way they have a covered section, so you can get out of the sun. 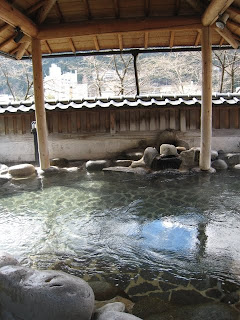 There 's also a jacuzzi, which is really fun (and rare) at public springs. Plus, there's a hotspring shower, a couple of small warm pools, regular showers, as well as "self-steamer" contraptions that look like something from a medieval torture chamber.

Unfortunately, I didn't have a chance to snap a pic. But they are basically wooden boxes that you swing open and sit in. The only opening is a round slot at the top for your head. So you have to *very slowly* swing the door closed, after which you sit there and steam for as long as you want. You literally cannot move your head more than 20-30 degrees, so if you're not claustrophobic, this contraption might just change your mind! Actually, after a few minutes, you get used to it, and you can swing open and close the door a couple of times to let some cool air in and assure yourself you're not on your way to the pearly gates.

Once you're done soaking, you can take a rest inside. They also have a restaurant. 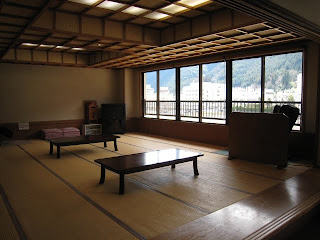 Your admission ticket to Curegarden allows for use of the facilities for 2 hours, which is more than enough time. I was given a 10% discount ticket at the friendly Gero tourist info center (next to the train station), so my stay at the garden set me back a whopping 540 yen (about 6 bucks).

On a side note - yes, Japan can be a costly place to visit, but there are so many bargains like this one that you can travel through the country (and have an excellent time) for a fraction of what it costs to visit Europe or the USA. Twenty years ago, Japan was definitely an expensive place. But economic sluggishness and deflation (which was something like -1.4% last year) mean that as other places get more costly, Japan is getting cheaper.

Gero also has some excellent restaurants, like this friendly soba house: 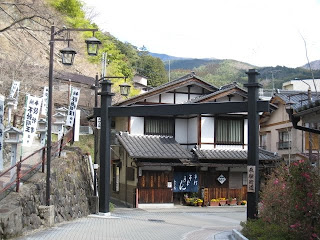 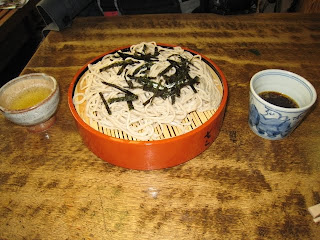 And you don't have to ask for soba broth (which is in the brown/white teapot), since they bring it to you automatically. After you eat soba, a nice way to finish it off is with some of the water which the noodles were cooked in. You just pour it into your soy sauce/wasabi/onion mix and then drink the whole thing. Savory! 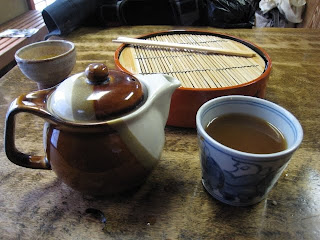 After lunch, I wandered the town and came across a long brook, called Seseragi. I discovered a path alongside it and ambled up the hillside. 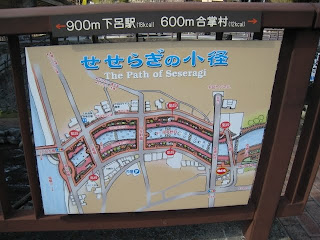 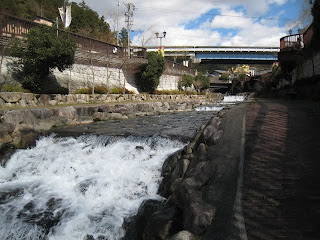 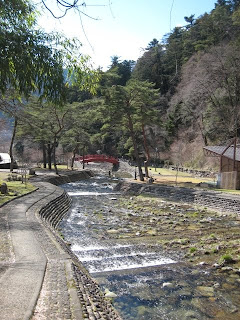 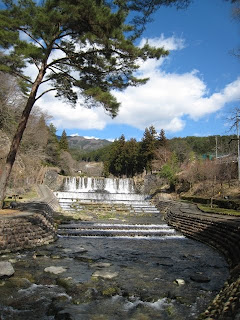 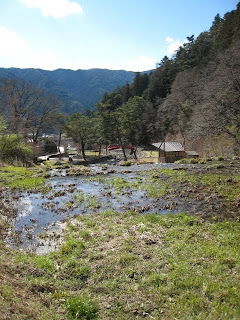 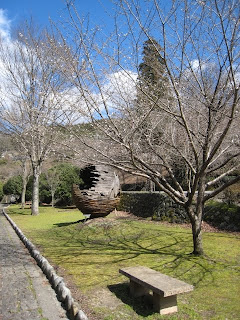 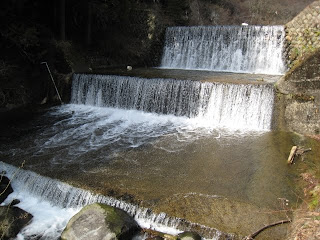 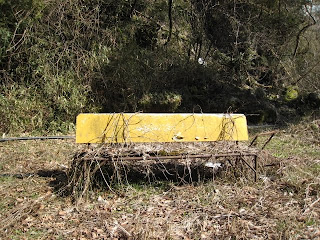 As the path ends, you're greeted by several stone statues - a very pleasant group overlooking the brook. 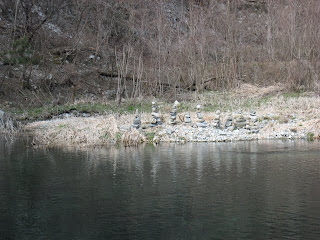 After an hour or so sitting there and munching on rice crackers, I wandered back down and explored another part of town. Like Takayama, Gero has a folk village containing examples of traditional houses. I was short on time, so I didn't go inside. 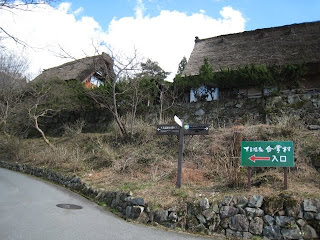 Just beneath the village is this excellent shop, which has some *damned fine* macha (green tea) ice cream! 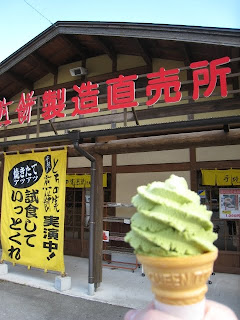 As soon as I walked in, a window slid open and someone handed me a fresh from the oven cookie (made mostly of ginger and molasses, I think), which was so good I bought two bags! 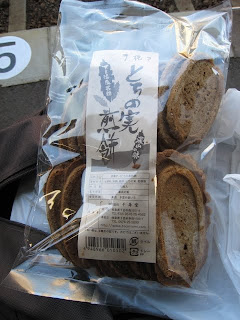 I rounded out the feast with one of the finest canned coffees 120 yen can buy: Georgia Vintage. 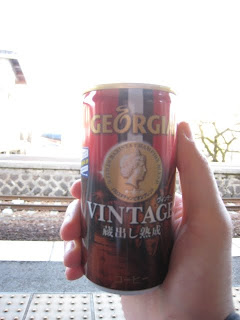 One more sight to see in Gero is its quiet, understated temple: 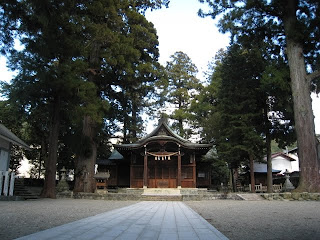 I think this has been my longest blog post in about a year. If you're still with me, l'chaim! Gero really is a nice place to rest yourself for a day or two. I like the town since it's so authentic and enjoyable. Sure, the economy is built around the hotsprings, but, from what I can gather, it's been that way for a long time and is a central part of its character.

Gero reminded me of a few other places. The resort feeling is similar to Ito (southwest of Tokyo) which is near the ocean. Also, in the southwestern USA, there's a place called Hotspring, Arkansas, which is very hospitable. Then you've got Beitou, a hotspring area just north of Taipei.

I really enjoy places that remain authentic and "alive" without turning into postcard villas that sell you an "authentic experience" while lacking a "lived in" quality. That's why I tend not to recommend places like Kyoto (though I hear it's extremely nice in places off the beaten path) but get really excited about towns like Kanazawa and Gero.
Posted by andy b at 10:36 AM