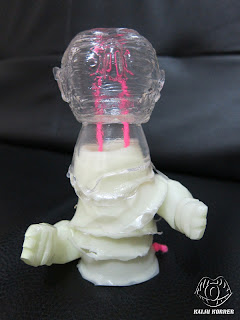 One of the most fun and interesting things about Grody Shogun is the way Luke pushes boundaries and challenges collectors to stretch their perceptions of toys and collecting. A while ago, he told me about an idea he had to convert plastic toy waste into a figure. Yesterday, as Irene and I visited his studio, he put the concept to the test and created a new toy before our eyes. There's no name for the figure yet, so for this article, I'll just call it the flash monster.

I think this is an ingenious repurposing of toy waste and toy parts, as well as a legitimate challenging of our perceptions of just what a toy is. We buy figures in bags or other packaging, and they all come nicely assembled and ready to play with or display. But when you look at the flash monster, with parts deconstructed and reconstructed, and the body formed by detritus slotted for the trash heap, it gives you pause and makes you ask, "All right, what do we mean by a finished toy (or any other product)? And is that just another word for a bunch of components ready to be disassembled and repurposed?" (That could be the credo for customizers and toy mashers!)

Plastic pontificating aside, the figure is downright fun!

Luke isn't sure how he'll be selling/distributing these yet. They're labor intensive, but he wants to keep the price super low - maybe even in the single digits. So really this figure, if it moves forward, is about hooking up dedicated Grody fans with something fun and different.

I hope we'll have a chance to see some flash monster mobs form in the future!
Posted by andy b at 1:53 PM

Ha! Luke is a real character! Does he have it strung together like a string or ball-jointed doll? It should be neat to see this painted up!

Just the one elastic string holding it together. Plus the arms were inserted through holes punched in the flash using a drill bit. (I'll have a video of that thing in action in a future post! ;-)

Definitely a cool idea. I can think of a lot of ways the extra flash can be recycled into more cool stuff (or just other toys).

Yeah that's pretty much the point - to do something fun and different with the leftover stuff. Sofubi collectors all have shelves of nicely symmetrical, clean figures made of trimmed and assembled plastic parts. And they look great.

Now here's the flip side.

This flash monster may not be everyone's cup of tea, but at least it makes you stop and say, "Huh. Now what the hell is that about?" People can think it's cool, stupid, or pointless, but at least it's challenging our frames of reference.

Or maybe it's just a bunch of junk thrown together.

Personally I don't mind some asymmetry and scraggly parts. Life would be boring if the lefts and rights all matched up.

Another idea would be maybe to layer oodles of flash onto the body of a Monster figure... might lead to some really wacky stuff. There's a world of possibilities when it comes to recycling!