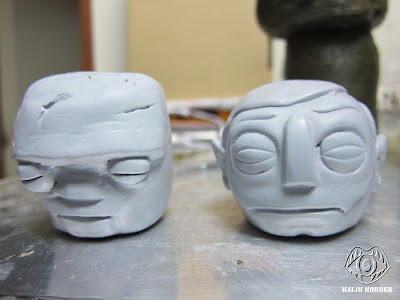 One of the funnest things about Grody Shogun's Monster line is the multiple body parts. That includes 4 bodies, 6 arms (3 left + 3 right) + 6 heads. As I've reported before, the figures are all based on two monsters: vampires and Frankenstein. In fact, all six heads were made from just two sculpts. Luke made several wax protos of each head, and from those, he sculpted the variants. So in addition to smooth heads, you've got others that are angular, coarse, etc.

Luke keeps the sculpts around in case he wants to create more mayhem down the line. The above pic shows the two original Monster head sculpts. Bit of Grody Shogun lore.
Posted by andy b at 11:56 PM

How very, very cool! Thanks for that pic, Andy! Do you know what material Luke sculpted them in? You're spoiling all of us with all this cool behind the scenes stuff! And that's a good thing!

Got an answer for you dude. The sculpting material is called kaminendo, and the brand is Fondo. As Luke explained, Fondo is to kaminendo as Kleenex is to tissue. (his analogy :p )

I just went Google hunting and found this page showing stuff people are doing with another brand of kaminendo: http://www.valsoft.jp/gundam/making/index.html

Thanks so much, Andy! Please tell Luke that he is officially "the poop." :D

Just an update: I think this might be a version of kaminendo that is available outside of Japan:

Just in case anyone wanted to give it a go.

Nice tip - thanks for sharing!