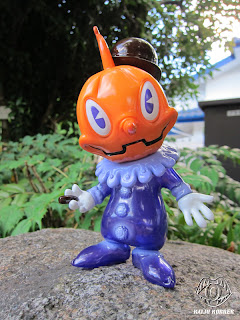 Stingy Jack is the first sofubi figure released through a collaboration between Circus Posterus and Tomenosuke-syoten. The making of Stingy Jack, a Brandt Peters character, involved an amazing design --> production development process involving top flight designers and artisans from around the world.

The process involved Brandt's original character design, as well as a 3D rendering by Circus Posterus's Teodoru Badiu, plus a resin prototype, followed by a new sculpt, waxing, test pulling, mask making, and many more steps until the figure reached the final manufacturing stage. For an exhaustive look at all the steps, check out the Tomenosuke blog and the Circus Posterus blog.

I'm thrilled to have the chance to discuss this toy, which blends western and eastern toy design and production techniques. Let's start with the packaging: 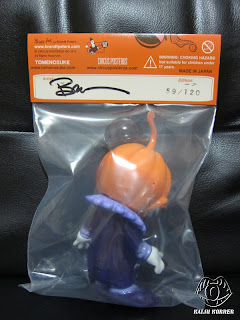 Let's look at the figure from all sides: 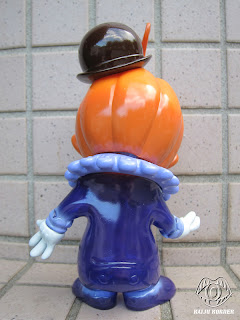 Let's move on to the articulation:

Next I'd like to talk about the paint. The colors were chosen using the Pantome Matching System.

Now for more shots of Stingy Jack in action: 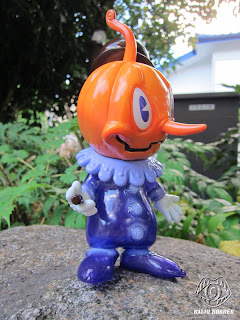 At the beginning of this review, I mentioned Stingy Jack is the first in a series of collaborations between Circus Posterus and Tomensuke. Indeed, the next figure, Kathie Olivas’ Calliope Jackalope, is already in development.

For the series, sales of the figure in North America will be handled by Stranger Factory:
Stranger Factory
109 Carlisle Blvd. NE
Albuquerque, NM 87106 USA

I hope you enjoyed this review as much as I enjoyed putting it together. Down the line, I hope to have a chance to bring you more close-up looks at these really fun figures. Thanks for reading!
Posted by andy b at 11:07 PM

Interesting information I haven’t been through such information in a long time.
Visit KK Select