It's hard to overstate how pervasive character culture is in Japan. We're all familiar with anime and manga characters like Doraemon and Astro Boy (sorry - Mighty Atom <- otaku power level up!). Then there are company mascots for everything from candy companies to pharmacies. 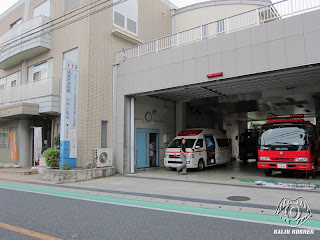 Today, as I was walking back from the dentist, I passed a fire station whose mascot's presence was so strong I had to stop and snap some pics.
More after the jump: 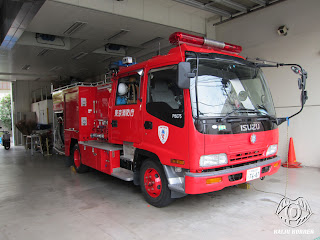 The fire trucks have also got the mascot, which I believe is named Kyuta (based on the writing beneath some of the images) on the door.

As I was musing on the fire station mascot, it struck me that in some other countries, you'd be more likely to see a flag or emblem of some sort providing a badge of identity for a public institution like a fire station. But in a nation comfortable with buying medicine from a shop represented by an orange elephant, seeing a character like Kyuta representing a fire station not only doesn't feel out of place - it feels downright normal! And that's a sign of how powerful character culture is in Japan.
Posted by andy b at 6:24 PM