From Ooze It to Japanese bootleg to Indie sofubi toy: The story of Yusei Majin 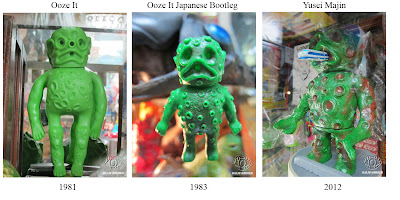 I'll admit it - I love origin stories. When it comes to toy reporting, some of the things that get my motor going are tying threads together, finding connections, and tracing toys back to their source. This story has a little bit of everything.

The figure, Yusei Majin, is produced by the same outfit that runs Cosmo Knight Alpha, a (mostly) vintage toy store in Tokyo. I first reported on Yusei Majin in summer, 2012, when the prototype sculpt was revealed at that year's summer Wonder Festival. Here's a look at that sculpt:
A few months after that, the first version of the figure was released. And the other day the second version was let loose:

Here's how the indie sofubi figure came into being.

The toy it's based on, Ooze It, was released in 1981 by Ooze It Inc.
With the original figure, you popped off the head, poured in goopy liquid, and watched the goop ooze out of head pores as you squeezed its gut. This, however, was not the start of Yusei Majin's story.


CKA's owner, Yoda-san, told me he first encountered the toy (or at least a likeness of it) in 1983. That year, an Ooze It bootleg was released in Japan:
The small figure (just a few inches tall) was sold in gachapon machines, and there were two versions: green and red. The figure has two parts, with pores in its head, but it didn't come with goop. 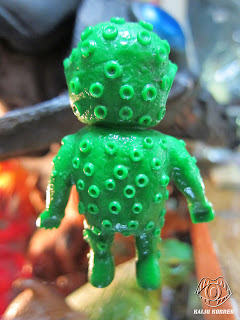 Yoda-san really liked the figure but it wasn't until later that he discovered that it was based on Ooze It, which he eventually picked up. Fast forward many years, and he got to work on making his own homage to Ooze It. And that gives us Yusei Majin, which at around 10-12" tall is bigger than both the bootleg and Ooze It:
Finally, in this shot you can see the original Ooze It along side a few versions of Yusei Majin: 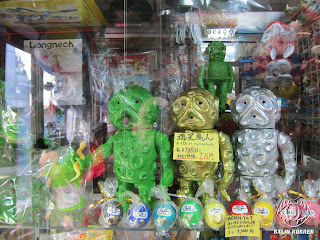 So in this story you had an American toy leading to a Japanese bootleg leading to an indie sofubi figure.

There's so much more cross-pollenation between US and Japanese toys, a classic example being  Transformers, which were originally based on diecast Japanese toys (mostly by Takara), then remade into plastic toys by Hasbro, and then reimported into Japan.

Twisty and windy go such toy tales, appropriate perhaps as we enter the year of the snake!
Posted by andy b at 7:48 PM

Don't forget the "Ooze Bat" from S7 and the Secret Base Ooze It mini too. That things getting around! All versions= COOL. I didn't know about the 1983 bootleg!

This article was a focus on the CKA related Oozes, but no doubt - it's worth mentioning the wider world of Ooze It tributes!