You really never know what you're going to come across around a Tokyo corner. Could be an old dude in a schoolgirl's outfit. Could be a 10 foot tall Gamera. Character culture is so ingrained in the collective consciousness that things which might be head scratchers in other countries are par for the course in Japan.

Here are a couple of close encounters of the character kind I had last week.

First, up: Shibuya Seijins. There's a new Softbank (big cell phone company) ad featuring a foreign actor (who is in a ton of their ads) + an oval eyed fellow we know very well: Ultraman. Here are shots of a big promotion they were having in Shibuya + a flyer they handed out. 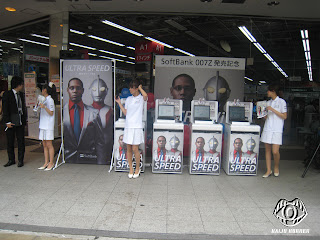 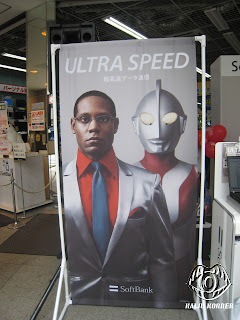 Next up, the tubular one himself: the Michelin Man. I spotted this fellow in Shinjuku as I was getting into a bookstore elevator. After we crowded in, the Round One struck a post as I snapped his mug. 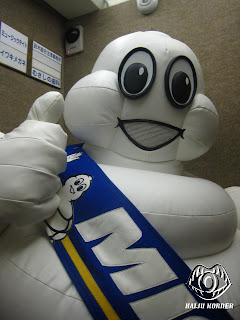 As I was leaving, I spotted a stand for some new Michelin guides, so I guess that's what he was there for.
Posted by andy b at 8:32 PM

Mark Nagata would love this...