A couple of weeks ago, I saw my first movie (X-Men First Class) at a Japanese theater. I followed that up with another film today (Harry Potter 7.2). The experience of watching a movie here is quite different from what I've seen elsewhere, so I thought I might share some thoughts and pics. 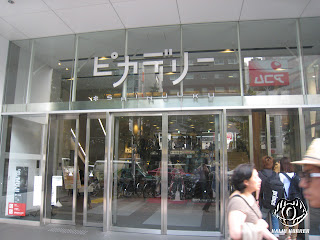 I decided to try out the Shinjuku Picadilly theater complex, since it came recommended. It's just a few minutes from the Shinjuku JR station and is easy to find. (On that note, it's also just a couple of blocks from Few Many.)

Let's start with ticket prices, which were the major reason I hadn't seen a movie here before. Walk by theaters, and you'll see posted general admission prices of 1800 yen, which is something like $22 at today's rates. No matinee prices, and they'll tack on another 300-700 yen if it's a 3D film.

Well, as with many things in Japan, there are plain sight workarounds. Once again, they start at the discount ticket shops which are found near many stations, and which I wrote up a while ago here. What you do is roll up to one and buy a voucher for a movie. Here's one for the last Harry Potter film: 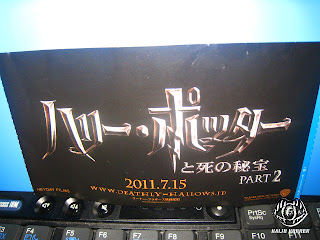 Vouchers usually cost 1280-1300 yen and can be used anywhere. You simply take the voucher and exchange it for a ticket at a theater. Even better, you can get tickets for a future date, plus they let you choose your seat (which I really like). For the Shinjuku Picadilly, you can go there on Tuesday and get advanced tickets right through the Thursday of the following week.

Also, theaters have special discount days. For instance, back at our Shinjuku spot, Wednesdays are Ladies Days, when all tickets are 1000 yen for women.

So if you take a couple of very easy steps, you can save a lot on what may be the world's most expensive general admission prices. I have a feeling the distribution companies may even be selling the vouchers to the ticket shops, since they're so widespread. But who knows. Incidentally, to buy vouchers at the shops, you won't need to speak any Japanese, as the little paper slips have the movie's logo or characters on them, making them easy to distinguish. 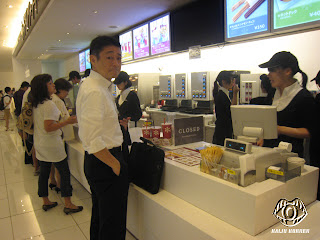 There are food concession sellers in the theaters, and the prices are as inflated as you'd imagine. The selection is also thin. Most of it's standard fare: popcorn, soda, etc. A couple of interesting offerings at Picadilly are croissants, soup, and beer. (Thankfully not sold as a combo set.) 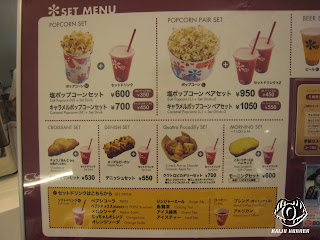 One bizarre thing about Picadilly is you have to buy popcorn in a set with soda. (Not sure why they don't sell popcorn by itself.) I noticed a ton of people in the theaters eating stuff they brought in, so that doesn't seem to be a taboo. I'm not even sure it's disallowed. 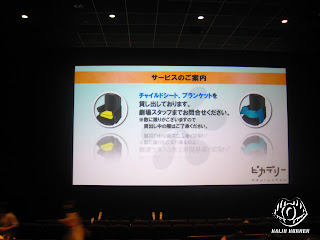 In front of the theater, as you go in, they offer child seats and blankets. I thought those were nice touches.

After the lights dim, there are a few commercials and previews. Nothing out of the ordinary there, and it only lasts a few minutes.
During the movie is when things get bizarre. Not necessarily because of the films themselves, unless you've subjected yourself to cinematic torture like watching a Big Momma marathon. It's the silence - a deafening quiet among the audience that I've never experienced. You wonder if people are swallowing the popcorn whole, because you certainly don't hear any munching sounds.

I have to say I really enjoyed this aspect of film watching. You can sit and watch a film and hear every nuance of the dialogue and score, while soaking in scenes without being blasted back to reality by a pair of chatting twits. I did hear a couple of cell phones vibrating, but that's it. Well, a girl a few seats down was sobbing 2/3 of the way into Harry Potter, but from what I've read online, that's common.

Both the films I saw were in English with Japanese subtitles. That was also a good thing, since I was worried that movies would be dubbed in Japanese. (That's the way they're usually shown on TV, which is a major reason TV here generally sucks, unless you enjoy watching other people eat.) Fortunately, it seems to be easy enough to find films at theaters in the original language.

Just about the worst thing about J-film watching is they keep the lights completely off through the whole ending credits - to the bitter end - past the grip boys, director's assistants, and second unit accountants. People start to shuffle out before rigor mortis threatens, but if the folks on both sides of you are staying put, then so are you unless you want to step on them to get out. But that's a small point. (And who knew how many thousands of people worked on X-Men and Harry Potter???) 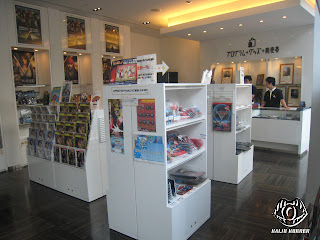 As soon as you get down the escalator at the Picadiily, you're greeted by a gift store selling you merchandise you never knew you needed. 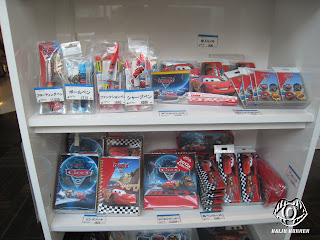 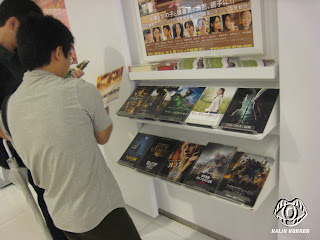 Here's another interesting thing about the Japan film world. Years ago, I had seen flyers for films like Indiana Jones, with the title and everything else in Japanese. Here I saw how those things are distributed. They're given out at movie theaters for free, to advertise films I suppose. I have to think all those paper and printing costs must have some impact on the high ticket prices, but that's just a guess. 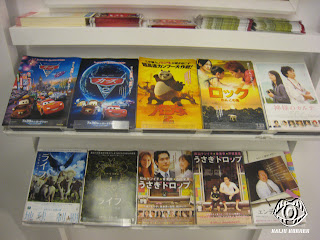 Anyway, I scooped a few up to take better shots. (I'll be giving them away, lest ye think I be hording the glossy pretties.) 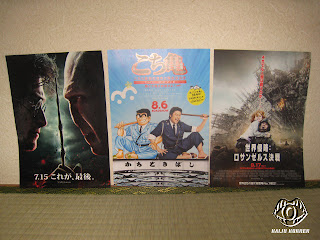 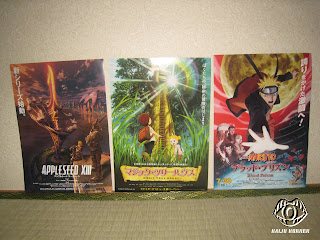 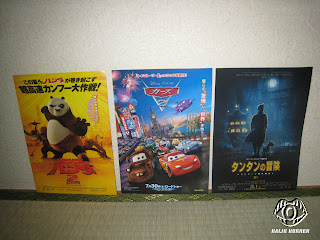 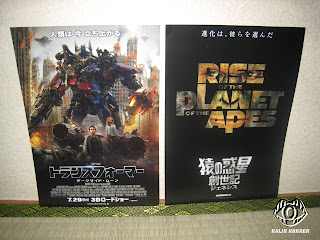 And here we come to the end of this little write up. I'd say in general film watching in Japan is great, especially if you can take advantage of ways to get cheaper tickets, and if you can see films at a date relatively close to their original release, so you can join in on the conversation with the rest of the world. It seems the blockbusters make it to Japan in good time, but smaller or indie films can take months. (Black Swan just hit the big screen.)

In closing, I want to say something clever like "The balcony is closed" but I'm happy enough with "Thank you for not munching your popcorn."

I watched a movie a few years ago at roppongi hills. Was a very new looking cinema. Still running 35mm film, and some of the best presentation I'd seen of 35MM anywhere in the world. Very impressive.

Thank you, Andy, for educating
us in an interesting way about
the way things are done in Japan.
I find it fascinating.

Anon - thanks for the tip! I'll try to check it out.

Krakit - me too! One of the really interesting things about Japan (and this is especially true when one is still learning Japanese) is very little is overt (unless you go to a toy show!) So you've got to make an effort to figure things out and see what's around the corner, down the side alley, and behind the tiny door beside the lamppost. At the same time, there's no rush, and I'm learning the ropes on the slow train - life's more fun when you take time to check out the podunk stops and one horse towns. ;-)

In the first photo of 3 movie fliers side by side, it would appear there is perhaps a live action Kankichi Ryotsu film from last year? I did not find anything about it online, and had not heard of it. Can you read the title? It's the one that says 8.26 (release date?)

If not, sorry to bother you haha.

Hah hah you are a lucky guy! I happen to be standing next to a native speaker... in Boston.

OK, so the title is "Ko Chi Kame." "Ko chi" is short for "kochira," meaning "here." "Kame" is short for a place name in Tokyo. So the title basically means, "Here at a police station in Kameari park." Apparently there's even a statue of the comic character in the park. OK, that's all I got.