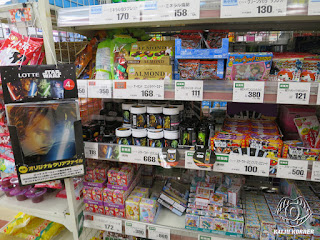 Every so often in Japan, when a show, movie, character, or something else becomes super popular, they call it a "boom." Some examples are Batman in the late 60s (thanks to the TV show), "super cars" in the 70s-80s. and Superman in the late 70s (thanks to the movie). Companies are extremely good at stoking fervor for the boom with marketing blitzes and product tie ins.

A few months ago in Japan, you could feel that the machine was revving up to start delivering anything and everything Star Wars to the nations' eyeballs. Giant posters appeared in Shibuya station, and there was even a Star Wars newspaper that appeared in convenience stores.

And now, with Episode 7 just a few months away, the product flow has begun, starting with branded snacks by Lotte.
More after the jump:


For decades, Lotte has put out dozens of Bikkuriman sticker lines. They're little stickers that come as a prize with a chocolate biscuit. But until recently, there were no Star Wars series. Now we have two, with illustrations done in an anime style. One covers episodes 1, 2, & 3, and one covers episodes 4, 5, and 6. There are 24 glossy stickers in each set.
I believe different parts of Japan are receiving different series. In Tokyo, the original trilogy is available, whereas the region around Osaka has seen the trilogy that shall not be named: 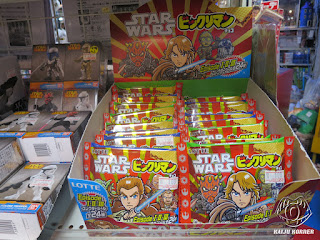 Finally, Lotte is giving away free A4 size file folders with the purchase of 200 yen in Lotte Star Wars products. They're really nice, but I've only seen them at one supermarket, way out in the sticks. So I'm not sure how easy they are to get. There are four types: Vader, Yoda, R2, and Hayden modeling for Emo Tiger Beat. 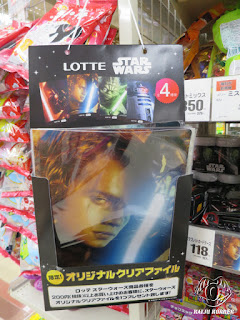 Now that the Star Wars BOOM is underway, we can expect a barrage of crossover products. So far the quality looks pretty good. Stay on target!
Posted by andy b at 1:19 PM