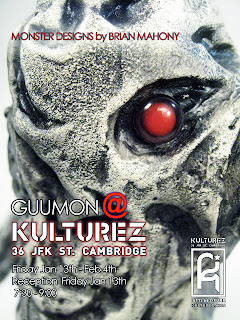 On January 13, overall good guy and friend of Kaiju Korner Brian Mahony will open a solo show of GUUMON toys at KULTUREZ, a clothing store in Cambridge, Massachusetts (USA). The show will feature one-offs by a slew of top flight artists. Here's a sneak peek followed by the full press release: 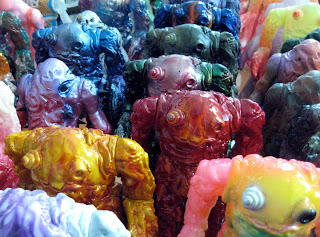 "GUUMON aka kaiju designer Brian Mahony is having a solo show of his figures in Cambridge Ma from January 13th thru February 4th.The opening night is this Friday 7:30 pm. The show venue is a modern hip hop/ graffiti oriented clothing store called KULTUREZ. There will be many new GUUMON one-offs as well as new handpaints and customs done by : BLObPUS,Shing Yin Kor, Jerry Gates, Mark Bently, and DLUX . Mahony got DUBMASHPRODUCTIONS to DJ the event, which shold make for a great fit. More info and pics about some of the figures can be seen on the GUUBLOG. Mahony will be at the show signing pieces and raffling off some Daigomi figures. Should be a great show."
Posted by andy b at 1:36 PM