Pachinko is one of those institutions which is closely associated with modern Japanese culture. Over the decades, the once simple game, involving little metal balls going through an obstacle course of pins and wheels, has become increasingly complex. The current iterations involve not only lights and sounds, but video screens, electronic scoreboards, and enough visual and aural stimulation to make you forget you're playing a game that costs money.
Then there's modern pop culture, which can be traced at least as far back as Godzilla, who first screamed his way out of the Pacific in 1954. Since then, countless heroes and villains in rubber suits have graced the silver screen and television sets. On top of that, there are legions of anime and manga pop culture icons like Astro Boy and Black Jack, not to mention digital idols like Hatsune Miko. It's difficult to overestimate the impact of these figures over the last half-century on the collective consciousness of people in Japan, and that impact continues unabated.
And yet these two strands - pachinko and pop culture - have not developed in isolation. Like the Ghostbusters' proton packs, the two streams, once crossed, become even stronger. I regularly come across new pachinko machines based on licensed manga, anime, and tokusatsu (live action TV shows and movies). And it's common to see older games and even toys that combine pachinko and pop culture figures.
More after the jump. 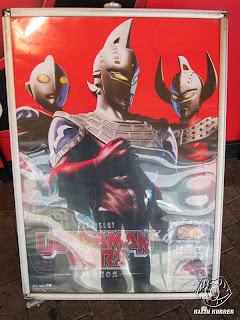 And that brings us to current times, where pachinko parlors number in the thousands and can be found all over Japan. Street side, you can see many posters like these introducing the latest games based on tokusatsu properties. 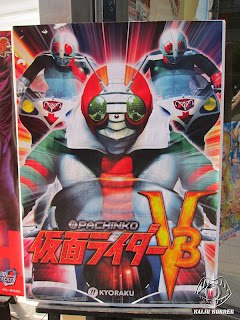 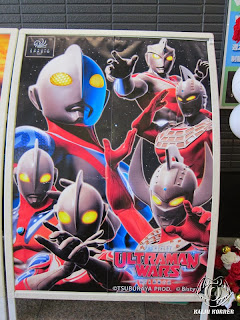 Now let's take a look at some of the machines.
The games are extremely sophisticated, with video screens right in the center to capture your attention. They even have specialized outer casings to go along with the theme of the show.
The sound inside the parlors is as loud as a rock concert, and the lights from the machines are dazzling. 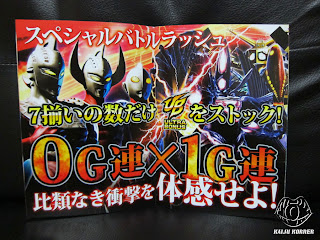 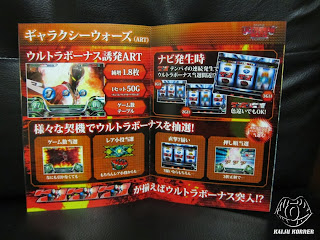 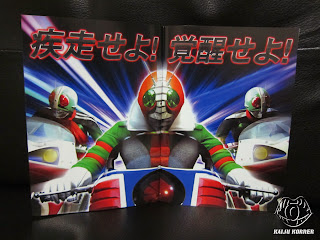 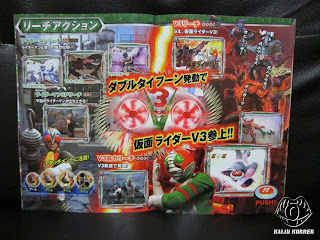 And that's a look at the pachinko/pop culture connection. If you're in Japan, it's worth popping into a  parlor at least to have a look. The sights, sounds, and sheer visceral overload is something you won't soon forget.
Posted by andy b at 11:01 PM