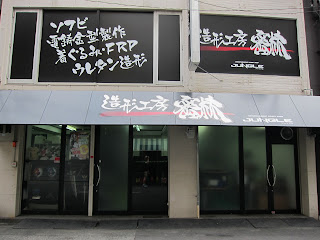 Tokyo isn't the only place in Japan with sofubi factories. As I recently discovered, toys are also being made in the heart of downtown Osaka, in a toy factory run by Jungle. It's in the Nipponbashi district, which is home to many toy shops, maid cafes, and more vending machines than you can throw a stick at. Which you should never do, because vending machines are lovely, and sensitive.

Jungle has a very big toy shop nearby, and they put on toy shows once in a while.

This is a working factory, but they let me shoot a short video, which was cool. Here it is:

If you want to get in touch with them, there's contact info here. In the past, they've had folks working there who speak English, so it may be easy to communicate with them via e-mail.
Posted by andy b at 1:40 AM

This is very awesome!
Andy, please show us more!

Sorry that's all the content I have to share. I was really restricted on what I could show since it's a working facility.

Hello Andy! I was wondering if you maybe know what kind of chemicals do they use to heat up the vinyl in the molds. I was trying to ask them directly, however their contact site isn't working properly. Thank you!

I'm afraid I don't know that. Maybe someone reading this does and can let you know. :O)